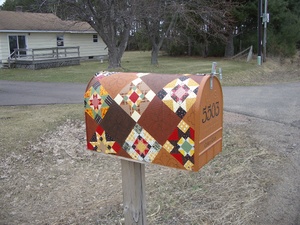 Is there anything more cool than a patchwork mail box? I want one of these.

So one day last summer I was out driving around western Wisconsin with Terry Atkinson {name dropping here ... it'll mean something later.}  We were on a mission to find a place to hold a retreat.

Somewhere north of Chippewa Falls we stumbled on this shop called the Cotton Club ... out in the middle of no where is this great house with a huge porch.  But the reason we knew it had something to do with quilting is because of this fabulous mailbox! A quilter's dream.

I can paint as well as the rest of the big brushes but this mailbox was a masterpiece. A sampler of wonderful quilt blocks all hand painted to look like real fabric.  Painting fabric with a brush is not easy and really takes a lot of skill ... I totally admire the person who painted it. Plus ... it was in 'my colors' and would look perfect with my stuff. But Terry ... the big spoilsport ... would only let me take photos and not snitch it like I wanted to. Something about going to jail for mail tampering. But even with a picture I still dream about this mailbox.

So after I finished examining this beauty, we went into the shop. It was a darling place ... beautiful fabric and great patterns.  And more mailboxes for sale! But none like the one I coveted. So I bought other trinkets instead.  But the owner kept looking at Terry funny and finally realized who she was.  And when she was finished {no disrespect ... the woman was overcome and really nice} she turned to me and asked if I was someone famous.  Well ya ... maybe in some circles I am ...

Everyone who knows me knows that I love love love the Minnesota State Fair! So much so that I opened the first ever quilt shop  during the fair this past August.  Sold a ton of Yo-Yo Makers ... but that's a different story.

The state fair has all kinds of quirky things to see ... if you just look ... up.  I had been walking around the fair one day and noticed that I was continuously looking down ... trying to avoid puddles from the rain or small kids in strollers.  And then I realized that I was missing the whole experience by not looking around ... so I began to look up and some of the things I saw!

Sweet Martha's Cookies are a staple for anyone who goes to our fair.  These are the best chocolate chip cookies in the world ... warm and gooey right out of the oven. {You've really gotta pity those poor teenagers who work here during the fair.} They make thousands and thousands of cookies each day. There are two booth locations and everyone has their favorite. I used to like the one  by the Grandstand the best ... until my day of looking up ... and then the booth in the middle of the fair stole my heart.

This booth is nestled in a grove of giant trees ... the kind that touch together over the street ... just like they used to in St Paul before Dutch Elm Disease made the neighborhoods look like suburbia. The booth is always packed so the plan is that you send one brave soul to the cookie line and and the rest of the group stands somewhere else ... and watches the show.  I drew the long straw and got to stand across the street ... and that's when I saw it. The Cookie!

This little sweetie is flirty and fun and just so out there! She has huge pink pumps ... white gloved hands ... great  big red pouty lips ... and longlashed eyes that wink at you! You know that 'come hither' look is just a big ploy ... to make you buy buckets and buckets of Sweet Martha's  Cookies ... some for now and some for the freezer.  If they make it that far. She's a masterpiece.  It makes me wonder who on earth brought her to life! What kind of quirkly mind would think of this?

When I spotted her on my Look Up day I couldn't believe my eyes.  Years and years of going to the fair and I had never noticed her. And apparently neither had a lot of other people because as soon as I focused my camera on her others began to look up with wonder ... they were seeing her for the first time, too. Totally fun!

So after that I was on a mission to see what else I hadn't been seeing. And there were lots of things! Like flying elephants for instance. But the point here is this ... there's so much to observe ...  you've got to open your eyes wide and let in the fun! Look up ... look down ... look around ...

Forever ... or as long as my kids can remember ... we've been going to Itasca State Park for large and small vacations.  Only three nights this year but no matter how long we go, it always seems like it just isn't enough! The cabins were built by the CCC {Civilan Conservation Corp} during the Depression ... huge logs ... floor to ceiling stone fireplaces ... porches with creaky floorboards ... and Lake Itasca peeking in and out of the trees. The best part ... you can't cook in them and have to take all your meals at Douglas Lodge. And because Douglas Lodge is a seasonal place, the staff stays the same and many of them have watched our boys grow up ... and love to remind Alex of the time he fell asleep with his head on his grilled cheese.

Always we have to photograph the boys in front of the marker at the Headwaters to the Mississippi River. You can pick your way across the rocks to say you've walked across the river ... but be careful ... one of my customers broke her ankle this summer on those slippery stones {seriously impacting her ability to control her footpedal on her sewing machine}. We have photos of all three of the boys wailing their heads off on their first visit to the Headwaters ... well, to be fair they were babies but it does seem kind of odd that ALL of them would cry ... but it's sort of our family tradition now so I'm looking forward to pictures of grandkids doing the same thing! We're short a kid in this shot ... Rob had to choose between a couple days at Itasca or a fly-in fishing trip to Canada a few weeks later ... you'd think IBM would let him have both {darn those corporate vacation rulers}. Alex and Ted were good sports posing for their annual photo ... sort of.

One of the things we do a lot at Itasca is read ... which is no big thing for Alex because he reads all the time ... I guess when your major in college is history there's never enough time to get ahead of all the books to make you smart that way. I caught him through the window one evening doing his favorite thing. Bitterweet moment ... he'll be on his way to Iraq during vacation next year. We're already scheming how to get books back and forth to him ... I suspect he'll become an even better customer of B&N by the time he comes home!

When my life goes on hyper-speed ... like it is right now ... looking at the photos from years of staying in these cabins makes me smile ... brings me peace ... reminds me that a mini-vacation is only four hours due north.