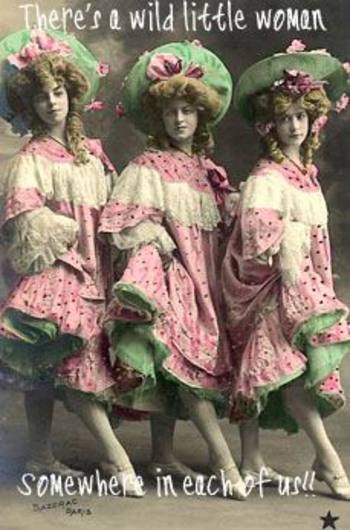 Anyone who's been in the Cottage knows that quilting and sewing aren't the only things I'm interested in. In fact, my worker bee, Deb, was shocked to learn recently that just on the other side of the back door in the classroom is ... a fully stocked scrap booking store! Or, at least as many of the components as Archivers, Michaels and Joann's could provide.

Just like me, I know you have more interests than quilting. I see it  in the projects you bring to work on Tuesdays at Wild Roses, or when I run into you at some of my favorite haunts. With that in mind, in February, I'll be starting the Unruly Girlz Club ... a place to indulge your passion!

I think the girls in the photo say it all ... inside each of us is someone who just wants to chuck the rules aside and play. For some, that may mean replacing all the suggested fabrics from a pattern with others that make them happy ... too bad if they don't quite match what the designer had in mind. Others may find their unruliness in knitting something like crazy and then tossing it in the hottest water their washer will allow ... just to see what happens. Or maybe you're like me ... you like to take components and assemble them into objects that are totally different than what was first imagined.

If you've ever thought "what if" or "I'm not going to do it that way" ... you're probably an Unruly Girl! Our new club will encompass all kinds of things ... quilting, papercrafts, knitting, beading, dollmaking, painting ... I'm looking forward to FABULOUS show and tell!!

Club meetings will be held six times a year ... we'll meet the first Saturday of the even months, beginning February 2, 2008 {which just happens to be Groundhog Day!} at 9:30 in the morning. Designer, Jennifer Diederich will be speaking about Creative Unruliness that day. If you've ever heard her, you know you'll have to listen closely as she speaks fast!

Throughout the rest of the year, we'll have make it take it projects, field trips, swaps and challenges. Sherri Falls from This & That pattern company is designing six patterns for us and you'll get the directions for them at the meeting. You'll be invited to a private blog for unruly inspiration.  Who knows what else we'll toss in as the year progresses!

Yearly club dues are $55 and space is limited. There is one rule we DO have to follow and thas one is set by the fire chief.

Merry Christmas to the troops! 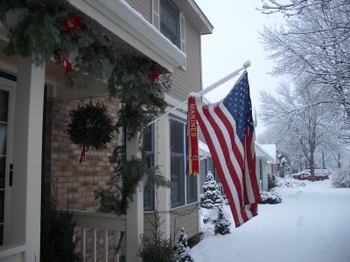 To all of you serving in the United States military ... all around the world ... we're PROUD of you and your service. We're holding your chair at the table ... come home soon ... come home safe.

Christmas is for memories of family and friends! 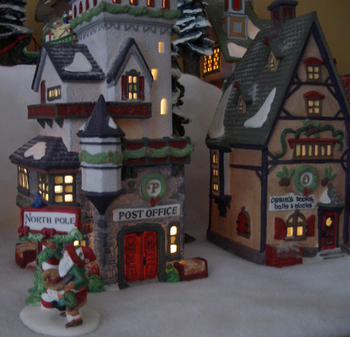 My mom died in the fall when my boys were young. Shortly before Christmas, my dad closed out one of her bank accounts and split it between my brothers and sisters and me. As a stay-at-home-mom, I didn't always have extra cash to spend, so I hemmed and hawed about what to do with it. The practical side of me said to put it in the bank ... the frivolous side said to blow it on something fun. What to do what to do.

My friend, Fay, had been listening to me struggling with this for a few weeks. And she also knew there was something I wanted.  Department 56 had come out with the North Pole series of houses and I just loved them. Fay gave me an option that would let me have my cake and eat it too ... what a great pal!! 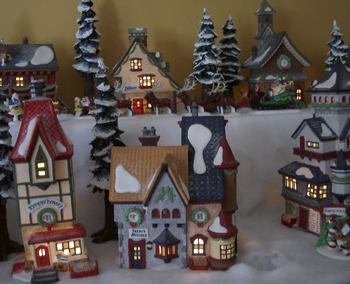 Fay suggested that I spend half of it on the North Pole houses and bank the rest.  Her reasoning was that I'd be able to have something special to remember my mom and still have some $$$ left over for a rainy day. And just to make sure I'd do it, she sweetened the deal. She told me that if I did, she'd come over while we were at church on Christmas Eve and set up the village for me. How could I resist?

So while we were at St Mary's and I was trying to keep those three boys occupied during such a long long Mass, Fay and her family were playing Santa for me. When they left, they lit up the village and turned on the lights for our tree.

I'll never forget the look on Rob and Alex's faces when they came through the door ... the magic of it all! Teddy caught up in the excitement but not quite sure how special it was as he was only 18 months old. And Bob ... no idea what I had planned which was so very very fun for me. 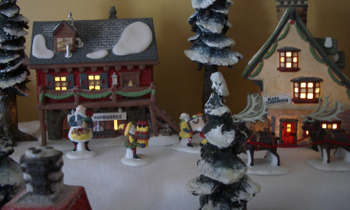 We've added to the village over the years and Bob puts it out in different places each year. And as with any Christmas, there are memories. My favorites are of Teddy at three four and five very sure that the elves really were inside those houses making toys. And Rob and Alex remembering the night and talking about it as they got older. Tomorrow, it'll be my sisters' grandkids peeking in the windows and looking at the little people, caught up in the magic of the season.

For me, though, it'll always be about Fay and my mom. Fay died of cancer a few years later. And the rest of the $$$ I banked? It was put to good use as it was the seed money I needed to start Rosebud's Cottage.

I hope each Christmas brings you special memories, too!  Merry Christmas. 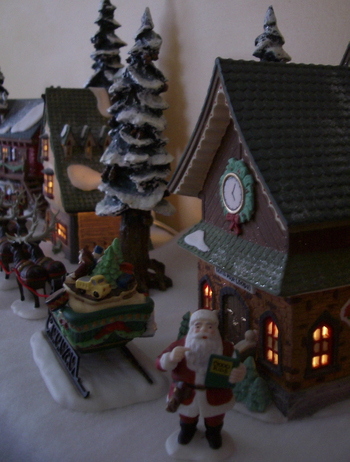 I love two color combos ... there's something just so beautiful about them. I saw this table setting at the store formally known as Daytons in Rosedale ... snapped a few pictures just to remember  and now I can't quit going back to the photos to look at them!

Like I need more dishes. Sigh. {Maybe I should go and just get the pitcher. It's probably on sale, right?} 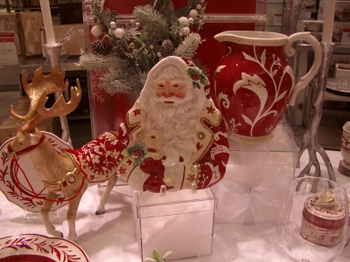 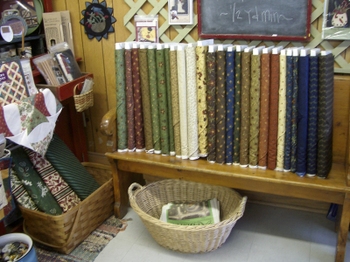 The Christmas clock is ticking ... and so is ours! At 3PM on Saturday we'll close the doors so we can begin a very long holiday weekend. I haven't had three days off in a row for forever! Of course, much of it will be scurrying around to get ready for guests on Christmas Day ... always tricky because we never know who'll show up.  My biggest challenge is remembering to bring home gifts that I've stashed away at the store ... mostly the one's I'm hiding from Bob!

For your last minute gifts, everything in the store {with exceptions} will be 25% off on Saturday! Lots of books, gifts, what's left of the fabric ... anything a quilter's heart could desire. Unfortunately, this will exclude hand dyed wool, kits and that terrific Williams Inn fabric {we just don't want you to have any of it} ... and stuff that's already on sale, of course.

If you're sending in someone clueless, we'll help them put together a nice package just for you. Call us with your wish list before they hit the door and we'll guarantee a Merry Christmas for you! 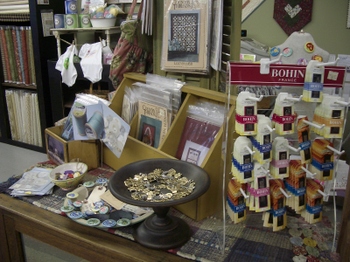 Forget the madness ... cut right through to savings! 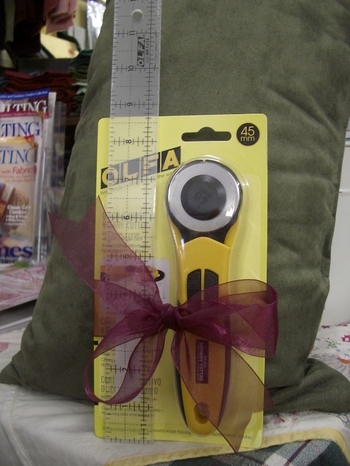 You know that OLFA has the best cutting tools in the world, right? But how about their rulers? {We can't keep them in the store!} Guess what the deal-of-the-day is on Friday?

To get you hooked on the rulers and to introduce you to  OLFA's new Quick-Change cutter, we've packaged the cutter and a 1x12" ruler  together for $33.95 as Mistletoe Madness continues.  We've even tossed in the ribbon ... great stocking stuffer!

The Quick-Change Cutter  is terrific because it cuts  either right or left handed but changing the blade is the best feature ... it just drops off! A latch holds it in place so you don't need to remember the order of the parts to put it together again.

I like OLFA's frosted rulers  because they don't slip around on the fabric. I have more of the larger rulers ordered ... put replacing rulers on your resolution list for the New Year.

Check out my pal Pat Sloan ... she was the featured designer in the Fat Quarter  newsletter.  You can sign up for future issues here .

Soooo ... Mistletoe Madness is almost over. One more day .... 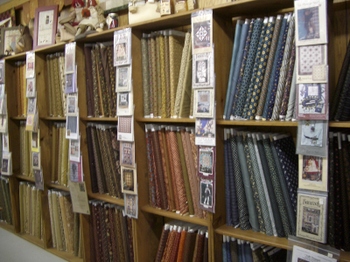 Ok ... on December 27 I'm forcing everyone to come in and help with inventory counting and the one thing we hate to count ... well, besides the patterns ... is the fabric. So you've got to help us out!

Bolted fabric will be 30% off all day long on Thursday and that will include the bolted wool as well {some would be great for penny rug backs}. If you've been wanting to make something from Harmony or Destiny by Red Rooster ... here's your chance. You could get it all!

And then there's Christmas fabric ... I feel crazy ... how about taking 50% off what's left of that? Stock up on the cute ones with peppermint candies on them ... or how about Christmas Past or Tamarac Grove?

Minimum cuts are 1/2 yard and there are exceptions. {You knew that.} Obviously fabric in the sales bin is excluded. But so is Williams Inn by Benartex because we need it all for the Be Attitudes  block of the month we'll be starting in January.  You can purchase some but it'll be at full price on this group.

Just to show you that I'm not a Grinch ... and because I know you'll be breaking down the door for this one ... I've decided to skip my day off on Thursday. Sigh. {Most of you know I'm hiding in the back room anyway on Thursdays so no big surprise, huh?} Don't forget we're open late.

Bonus with Gift Certificates during the Madness! 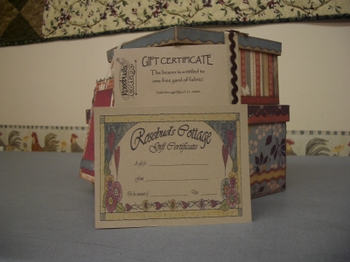 Who doesn't like getting EXACTLY what they want as a gift? That's the beauty of our Rosebud's Cottage gift certificates. It only gets returned when you find something perfect.

So on Wednesday, when you {or your favorite loved ones} purchase a gift certificate for $50, we'll tuck in another for a free yard of fabric as a bonus! A gift from them ... a gift from us.

Gift certificate trivia ... did you know I hand painted the original? For those of you who have been with me for a million years ... it was when I had the location above Dominos at Second and Clark in White Bear Lake. Someone wanted one for a teacher at St Mary's and I didn't want an ordinary card. It took me longer to figure it out on the computer than to paint!  My window from the second floor looked out on the library and that small park running next to it with the veterans statue. I remember it like it was yesterday!