Who can resist new books? These just came in from Leisure Arts and one is as great as the next!

First up, I Can't Believe I'm Quilting Beyond the Basics by Pat Sloan. This is definately a great book for the next step beyond newbie quilter ... but I found there were great short cuts for someone who's been doing it for a million years. Great photos and instruction ... perfect way to make four Flying Geese at once.

Tot Stuff by Linda Lum deBono is for that mom who's just getting into sewing ... or the new grandma who might be new but also might have some experience and just want something quick to make. City style designs are hip hop and rockin'!

Mary Engelbreit has given us The Art of Embroidery and has included both old-fashioned tried and true designs as well as modern and trendy ones. She shows you how to color them in ... how to do the stitches ... as well as how to make the projects.  Get out the needle and embroidery floss.

And finally from Gooseberry Patch we have Sew Simple ... another one of those books for a beginner but just as good for advanced with fun projects for your home or as gifts ... totes, runners, organizers ... all done with pretty, contemporary fabric. And then Sweet & Simple Embroidery is filled with darling, sweet embroidered pieces ... bread cloths, aprons, little signs, sachets and the ever popular 'days of the week' towels ... great instructions on how to make the stitches. Did I mention recipes?

All of these books are perfect for Spring time sewing ... pretty little things to doll up the house. Guess what's going to be on the truck next month ... this cool fabric from Andover! Cosmo Cricket is a scrap booking company ... they design paper and other doo dads for scrappers ... but why shouldn't quilters get a piece of the action? I'm so delighted to see their line ... giant polka dots ... we're talking silver dollar sizes here ... and strips an inch wide. So stinkin' cool!

I managed to get my hands on fat quarters from the line ... it's going to kill me to cut into them because they look so pretty all snuggled together.  But I'll bite the bullet and do what I have to do.

Can't wait for the truck to arrive ...

We were sewing fools at the Cottage this week! 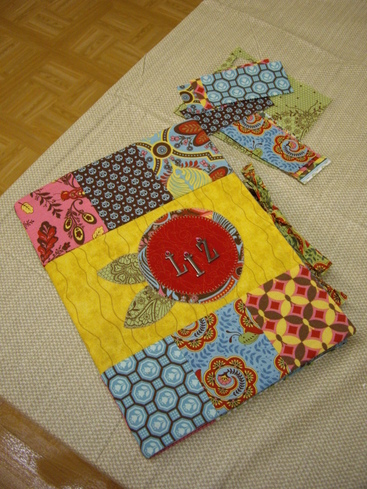 This was one of those fun weeks at the store where people were in using the classroom and making things. I got a kick out of Liz who had President's Day off on Monday and decided to extend that into a few more days off. She arrived bright and early Tuesday morning and parked her sewing supplies on one of the tables ... by the time she repacked her car on Wednesday night, she had about ten projects finished.

One of the projects she finished is the notebook cover we received from Sherri Falls of This & That patterns as part of our Unruly Girlz club. She used charm squares and fats from the Flutterby line by Moda. We found some metal letters for her to spell out her very short name, slid in the notebook and called it done. Liz was able to make another book cover from that charm pack and has almost enough for another. 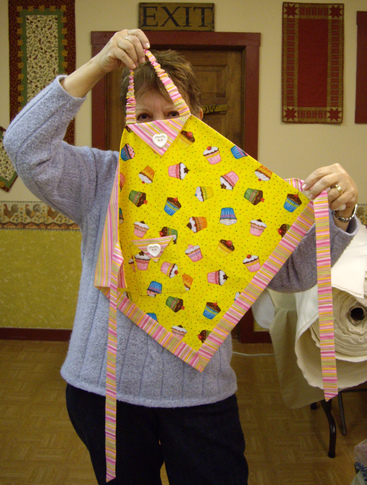 On Wednesday, Bobbi joined us along with a few others. She made this adorable apron for her grand daughter's birthday. It's the kids sized version from a pattern by Vanilla House. Can you stand how cute it is? Those cupcakes on the fabric ... and then she found the perfect heart buttons in our button bin. Makes me want to bake a cake ... or have a grand daughter! 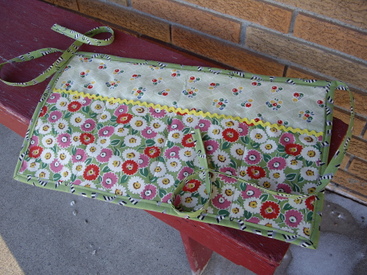 Not to be outdone ... I had to finish up a project for the OLFA website. This is the Retro Handyman's Apron ... easy to make with a little cotton batting between the layers of the background fabric to give it some heft ... rick rack a necessity! Liz is going to make them for her sisters for Easter. 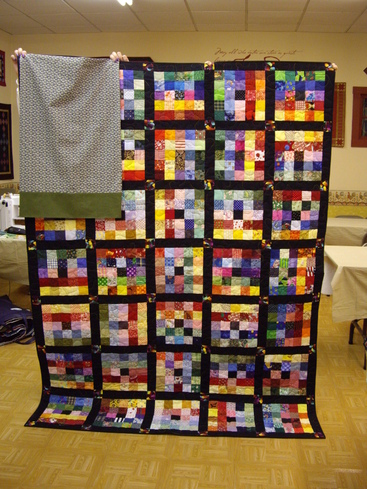 A few Quilts of Valor quilts were finished up, too. These are from the Northern Material Girls quilt guild in North St Paul. Last month, a group came in and made the tops from bingo blocks that we had at the Christmas party. They were quilted pretty quickly so that they were ready for show and tell when the guild had Page Johnson speak about QOV Minnesota on Monday night. Bobbi brought them back to the store where she and I made the labels and Liz whipped out a couple of pillowcases to hold them. Now, they're on their way to a Minnesota soldier. {Our QOV 'hive' will begin meeting on the second Monday of each month if you want to join us for this worthwhile cause.}

All in all ... a pretty productive ... and FUN ... week at the Cottage ... and this is just the tip of the iceberg! It's amazing how much can be accomplished when there's no one to interrupt, no ringing phones to answer, no laundry to toss in the washer.  The Cottage is always open for anyone's personal mini retreat!! 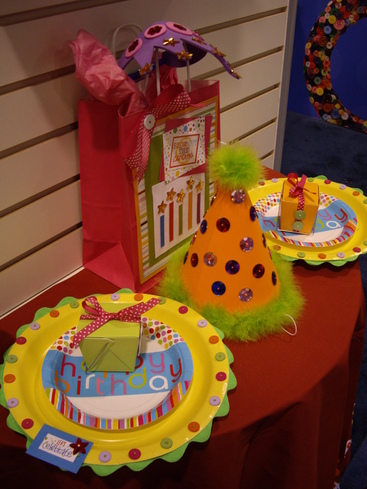 There's something about party hats that just make you smile! I don't know if it's the anticipation of a party ... or if it's because they just look happy.

At CHA, there were lots of party hats in lots of booths. Some of them were to show off embellishments. Others were showing how to make a table display by using die cuts and other cool doodads.

I love this photo because of it's bright colors. But would you really glue a bunch of buttons around the edge of a plate ... or on more than one? It is really cute, though so maybe I would. Love the feathery boa trim! 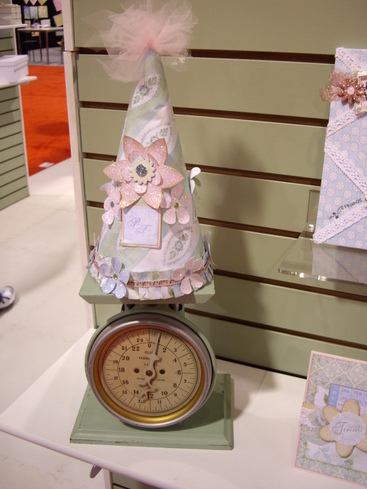 The party hat on the scale is a great display set up ... scales are fun things to decorate with. Wonder if putting this cute paper hat on the scale measures how much fun to expect!
And it wouldn't be a party without more cupcakes, would it! Have you noticed the surge in fake desserts lately? What's that all about. 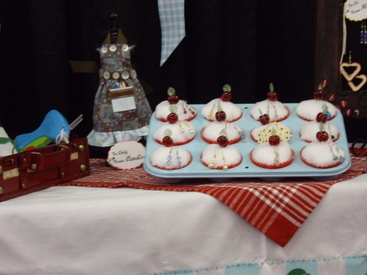 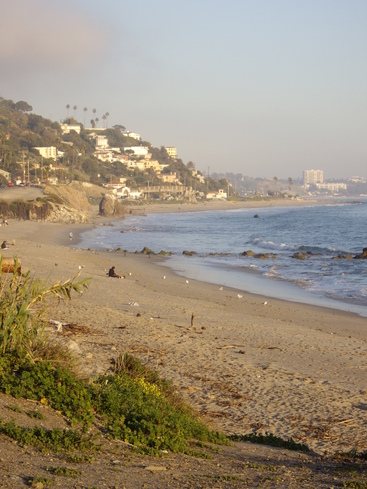 As I sit here on the edge of my bed, watching the blowing snow swirling off my roof, it's so hard to believe that somewhere just west of me is beach and blue sky and warm breezes.

This is where I was just a week ago. Teddy and Bob were with me for my trip to CHA in Anaheim and on Tuesday when I was pretty much done with seeing all the pretty things at the convention center, we headed up the highway to Hollywood, Beverly Hills and then the Pacific Ocean. We drove up to Malibu and then turned around and headed south.

This is the view just north of Santa Monica ... the waves were rushing and there were lots of surfers in the water. Just what you'd expect to see in California. Ted wanted to go to Venice Beach and we arrived seconds after the sunset ... but it was still pretty spectacular! And chilly once the Sun went down.

We ate at this tiny restaurant a block off the beach ... Poccolo Restaurante ... it smelled so goooood in there ... almost everyone but us spoke Italian ... and if we didn't have to drive to the LA airport for the red eye flight, it would have been fun to linger over a great bottle of wine. I'm sure the place is popping when the weather gets really warm!

One last view of sunny California. What exactly are those two looking at?? 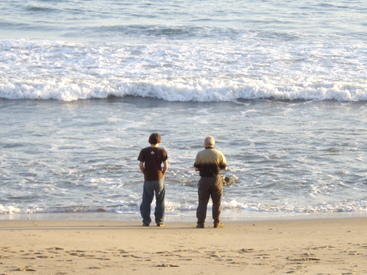 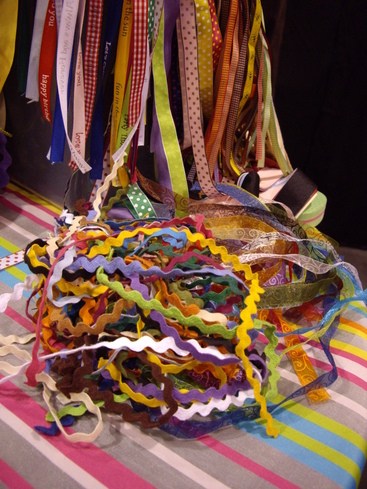 I'm hanging out in California and not to make you folks in Minnesota feel bad or anything ... but gee it's nice not to have to wear a jacket!

This week is CHA ... the Craft Hobby Association trade show. They advertise it as the the hobby world fair  and they're right ... so much to look and explore that it makes your mind hurt! This is hard work shopping for the store. What if you guys don't like what I get?

Here's one thing I think you will ... I've ordered a couple groupings of rick rack from this company ... tiny, medium and jumbo ... don't they look cool in a pile? 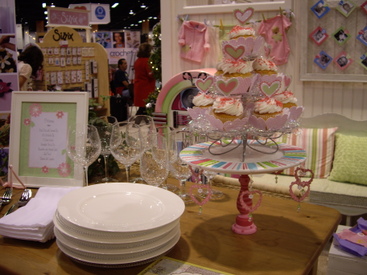 One of the things not missing at CHA are pretty displays. They don't get any cuter than cupcakes on a plate! This was at the Elison die cut booth and they were showing table decorations you can make with dies and paper. In the background were totally adorable baby things embellished with fabric die cuts ... makes me want a baby ... a grand baby ... but not just yet I guess.

The last picture I'm going to show are the doors to the hotel ... a work of art. Imagine the design on a quilt! Lots of inspiration here ... everywhere. 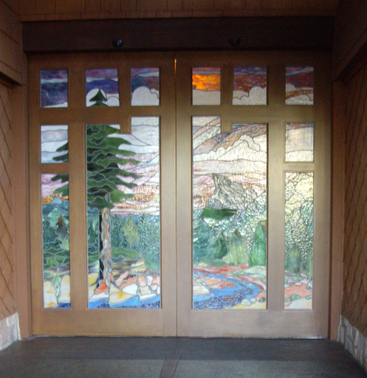 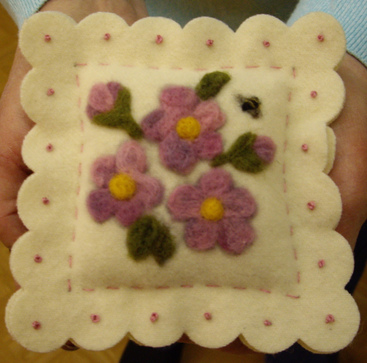 So we were goofing around the other day because I had to come up with a wool pincushion for a group ... and this is what we ended up with.  I say 'we' because I started it but then forced my left-hand man, Chris, to finish it up. She didn't seem too sad about sitting down and needle felting those little flowers. Her little bitty bee is a work of art!

This is a project for a group coming to the store for a class tomorrow {did I mention I'll be on a plane to California when it's happening?}.  They wanted something Spring-like and if you saw it in person, you'd agree that it makes you want warm weather!

We used hand painted wool roving in pinks and purples for the flowers and hand dyed green and gold for the rest of the leaves and centers. So pretty!

Now that we've been petting it and admiring it for a day or two, we decided that we really need to toss it on the class schedule. So we did ... here are the details.

The class will be on Wednesday, March 5 at 6:30. The fee is $22 and includes all the supplies you'll need to make the pincushion, except for the needle felting tools. If you don't have one of the starter kits, we can get one for you in time for class.

So come on and join us! How often do you get to take a class where you'll actually get your project done by the end of the night? Call us to sign up today! I love this quilt by Pat Sloan  and want it for my very own.

I'm trying to plot how I can get one of those slave girls ... I mean employees ... at the store to make it as a sample {but we all know it'll be for me!}

Pat designed it for the cruise she led last month. That girl has the BEST life ...