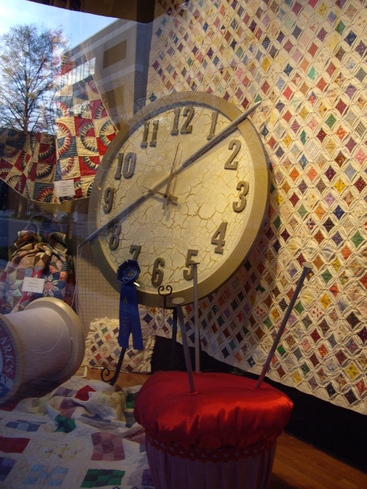 It's always time to quilt in Paducah KY when the American Quilt Society holds their annual show here! How can you not love quilting when it surrounds you at every turn. On my morning scavenger hunt for a Starbucks-like coffee shop, I couldn't resist doing a little window shopping. Sit back and enjoy what I found! 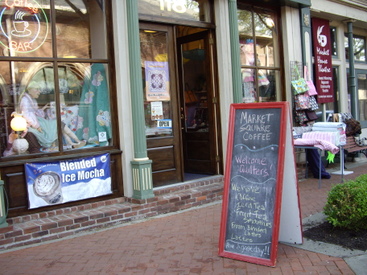 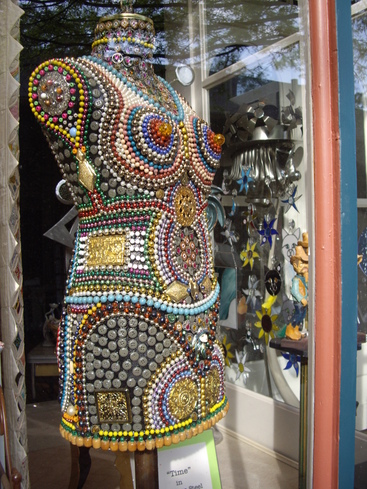 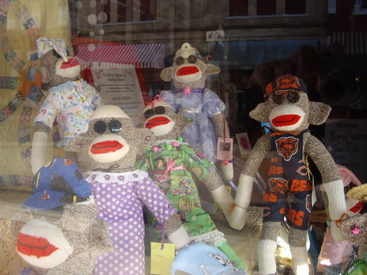 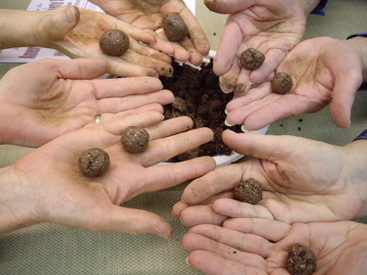 Sitting in our classroom at St Agnes in 1970, the original Earth Day  had a certain scare tactic to it ...  we were reading Thoreau's Walden, watching rivers go up in flames, hearing that the great lakes couldn't sustain fish because of pollutants. Yike! Would the world even last beyond 2000???

Well here it is, 38 years later. Out of that first Earth Day, recycling has become a way of life. We watch how much water we use. The air is cleaner. Conditions have improved. Not saying its time to stop but look how far we've come!

So you know that phrase what goes around comes around? Well here we are facing a revived Go Green movement and it tickles me that something I did in the 70's that was considered kind of radical,  has been rediscovered by a whole new {younger} group. At our last Unruly Girlz meeting, we all got down and dirty with one of these methods of subversive gardening ... seed bombs!

Seed bombs are clay balls packed with seeds and nutrients, just waiting for the right conditions. The premise is that they are launched into areas that need a little bit of sprucing up ... like nuclear power plants, abandoned lots, inner city sidewalks.

To make them, you mix together two parts of mixed seeds with three parts of compost, then stir in five parts powdered clay. So far so good ... the clay you can get from a ceramics supplier ... or me! I have three quarters of a ten pound bag left from our meeting. Maybe I'll make some flower pots.

Next comes the hard part ... use a shovel for this ... you need to add water and mix it up until it holds together. Like pie crust. Then you roll it into balls like when you make cookies ... let them set out to dry for a few days. Store them until you want to make an ecological statement and then toss away! When it rains, the nutrients in the compost and clay will sustain the seeds until they get a chance to grow. Cool, huh?

Now, when I'm driving around town and see weird little groupings of flowers here and there, I'll wonder ... is it random ... or was it a Seed Bomb. Happy Earth Day Mother Earth!! 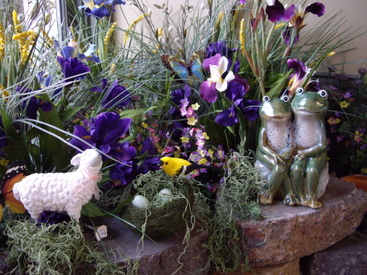 I know I know ... the rest of you in all those warm places are probably in the middle of Summer now ... but for those of us who live up high, when it finally feels spring-like, it is a huge emotional release!

Like this morning ... for the first time in months I've been able to walk outside without the worry of not seeing a piece of ice or coming home with sloggy shoes. I'm so sick of the stale air at the gym and having to plug into a treadmill to feel healthy. It was fabulous seeing the grass beginning to green up at the curbs and the little flowers popping up out of the gardens. And to see who is finally putting their Christmas wreaths out for the garbage guys!! 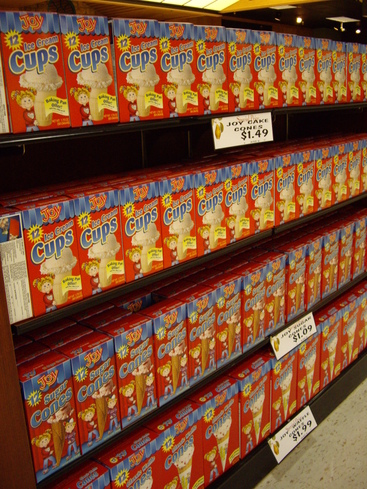 You know how else I can tell it's Spring? It was 71 degrees yesterday.  Kowalski's put up five feet of cone cups ... on sale even! Linders have their garden centers dotting every parking lot in town. And they are full of pansy pots.  I'm digging in the back of my closet for sandals.  Even though the ice is still out on White Bear Lake, it's still finally Spring mentally and that's one of the best days of the year! 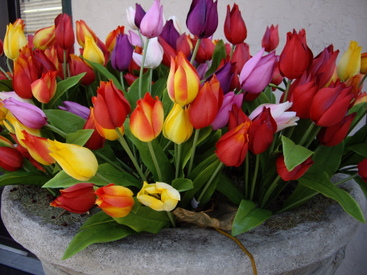 Take me out to the ballgame! 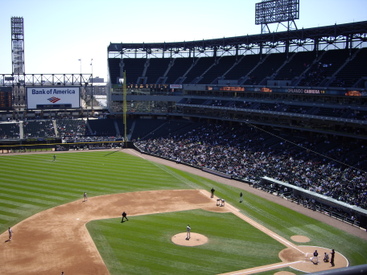 Nothings says welcome to Spring faster than those words, play ball! Especially when the ballpark is outdoors with the wind blowing hotdog wrappers across the field and the Sun beating down on your face. So already, if  you live in Minnesota, you know this scene isn't happening there. This is the field at today's White Sox game in Chicago! 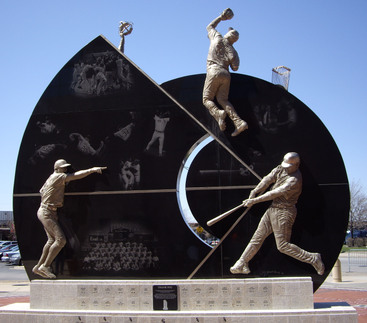 One of the terrific things about baseball stadiums is how dedicated they are to the sport. It carries over into all the little details. This sculture when you approach the gate tells you the entire story of the game ... the emotion of being out, catching a ball, hitting a homerun. Etched into the background are scenes taken from ball games in the past ... really helps you get the historical ties baseball holds.  The story is universal ... anyone who's ever been to a game understands it. 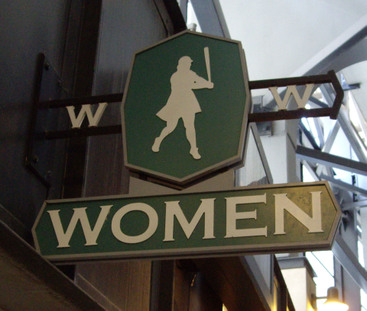 Love how they've carried out the theme right down to the bathroom signs ... and also show that baseball isn't just a guy thing ... women can play it, too. The brick work outside the stadium was so interesting ... done in fabric, we'd call them autograph quilts. 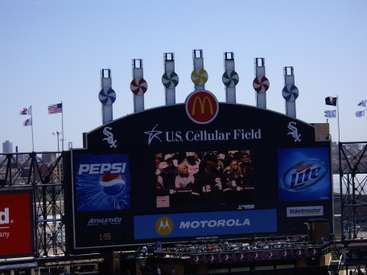 It was fun to see color in unusual places ... like these gigantic pinwheels over the jumbotron. Totally unexpected. 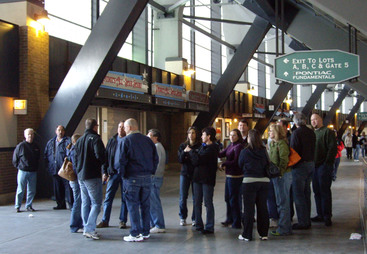 And of course, you need spectators at the game. But what's so special about this group? Well, this is the OLFA sales team and they're having the annual meeting in Chicago! Three days of  plotting and planning how they can get OLFA products into the hands of every quilter in the world. Looks like they're mixing work with fun, too! 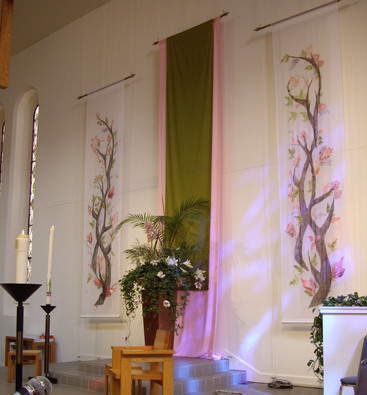 Pink is always a great color for Spring ... it's fresh and happy looking and goes so well with cherry blossoms and pretty tulips. Keeping to my blog theme of inspiration everywhere, I thought it interesting that you really can be inspired sitting in church!

This photo is behind the altar at St Mary's of the Lake in White Bear Lake. Whoever does the designing of the banner combinations lately really does have a great eye. They've matched up an olive green with the pink and instead of making the green a background, they put it as the focus. It makes the pink that much more intense ... something I've been able to ponder and enjoy these last few weeks. I love the look of these two colors together.

Wish you could see this close up. The banners on either side are hand painted on a cheescloth type of fabric ... that couldn't have been easy to paint.  The flowers have a free form style to them as do the branches. Having the pink of the center banner nearest to these really pulls out the variety of pinks that were used in the painting.

The effect is enhanced by sunlight coming through a round, stained glass window. The whole scene is pretty spectacular and inspiring ... but I guess that's what church is supposed to be about, right?

Some girlz were just meant to be unruly! 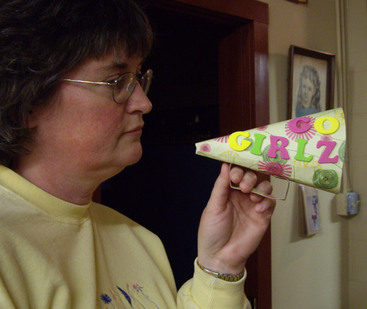 Last Summer at the Cottage, we invited anyone who wanted to become members of the Unruly Girlz club. The main premise is that it's for people who like to do more than just quilting ... and we've gotten them all in the club ... knitters, paper crafters, doll makers ... and a few quilters here and there.

So last Saturday was our second meeting and I had issued a 'cone challenge' ... they needed to design and bring a cone shape object.  They did me proud!

First up is Deb ... mom to two wildly active girls a dog and husband ... she's also her school's volunteer coordinator and the den mom to a herd of Girl Scouts. I think she needs a bigger cone!

Cones can be really cute party hats! A tussie mussie! Or a cone cushion! Or just 'cones'. That Roberta is one unruly girl! 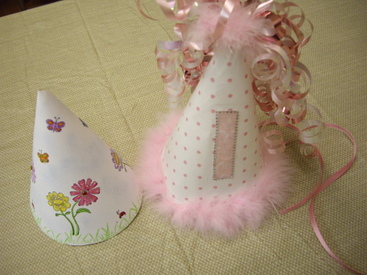 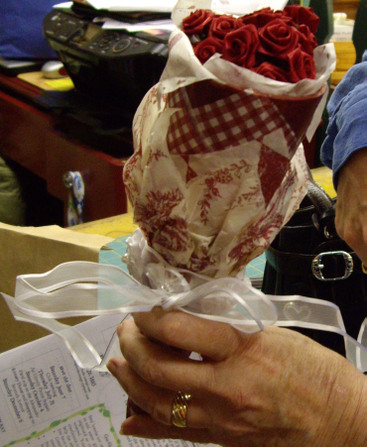 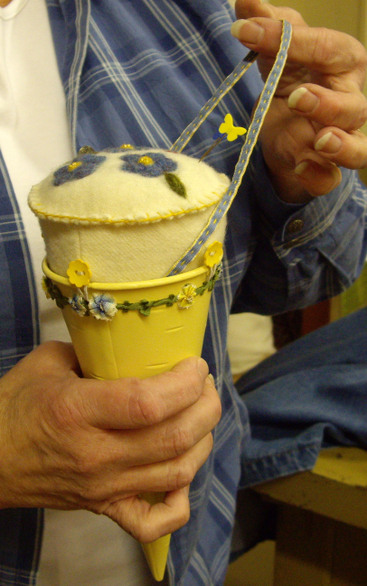 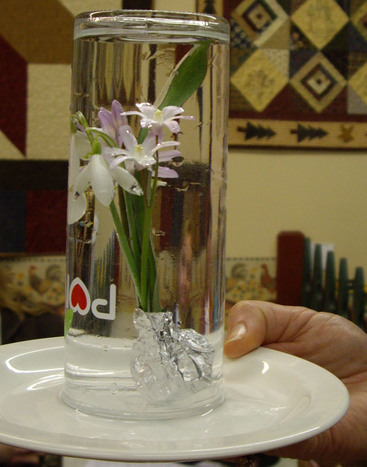 At our Unruly Girlz meeting on Saturday, we had a Master Gardener come to speak. Here's one of her many fabulous ideas!

Cut a few small blooms ... in this case, Snowdrops. Cut a piece of foil and lay a small round rock in the center. Pull the foil and rock up around the stems of the flowers and squeeze it in place to secure.

Put the flowers, head sides down, into a decorative jar or vase. Fill the vase to the very top with water. Place a plate over the opening and flip. Do this over a sink!!

Now ... just place on your table. If your plate was large enough, you could put little tea lights around the base. Or more cut flowers.

One warning ... make sure no one pulls up the vase to see how it works!

Isn't this sweet? I love how the bubbles formed on the flowers. Beautiful for one of the many showers that will be coming up soon.

Be our guest October 9 ~ 11 as we travel to Des Moines for the first annual AQS Quilt show! We've planned a fabulous weekend where you'll be submerged in quilting from sun up to sun down.

We plan on leaving the Cottage early enough in the morning on Thursday, October 9, so that we are to the Des Moines event center before noon. Our bus will drop you off at the door so you can shop, taking care to get your luggage safely to your hotel room. We'll be staying a the Embassy Suites, just a few blocks away. View as many of the quilts and vendor booths as you can, then enjoy an evening with your friends checking out your loot!

On Friday morning, we've arranged for a hot, chef cooked breakfast at the hotel, then you're on your way to the quilt show for the rest of the day. Come back to your room for a little nap if you need to!

Friday evening, we'll be boarding the bus for a private, special event at the Living History Farm. At the Farm, we'll enjoy finger foods and the wine bar while we view the quilts at their annual show. Then, Heidi Kaisand,  will entertain us with her quilt talk, The Family Jewels.

Saturday morning, we're off to the Des Moines Botanical Center for a viewing of their miniature quilts show. After a 'ladies lunch', the editors of American Patchwork & Quilting  magazine will treat us to a trunk show of quilts from the pages of their issues. You'll have a chance to meet them and see what goes into making their magazine. Following the trunk show, it's back on the bus and a run for the border so that we can be home before dinner.

The cost of the tour is $425 per person, double occupancy. Single and triple rates will also be available. Our tour is being arranged by Heartland Travel and Tours. Contact them for reservations and details. If you have more questions, be sure to call the Cottage and we'll try to answer them for you. Don't hesitate to make a decision as we know the seats on the bus will fill quickly.

I'm very excited to be able to offer this tour for all of you! Lots of thought has been put into all the details that will make it a special experience. I know you'll love visiting Des Moines and the quilt show ... and all the other events we have planned.  Come and join the fun!