Home Archives Profile Subscribe
Your pillowcase could be one in a million!
So long North St Paul ... hello White Bear Lake! 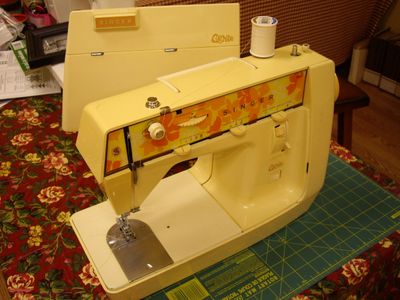 It's amazing how much is rising to the surface since we've begun clearing out in anticipation of moving the store this weekend. I'm finding old friends each time I open a box or look on a shelf. One great re-discovery was the first sewing machine I purchased with my own hard-earned cash! 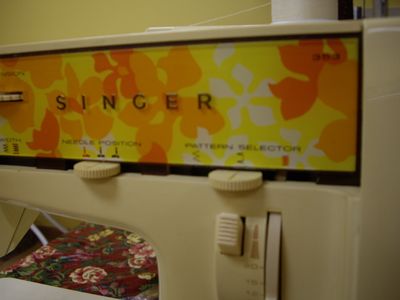 I've been sewing since I was eight or nine ... using Mom's tan Singer machine and a treadle before that. Sewed constantly and a huge variety of things. So at 19, when I left home in a huff for my first apartment in St Paul, Mom's machine didn't come along with me. I was forced to buy my own. Can you guess what year this happened? 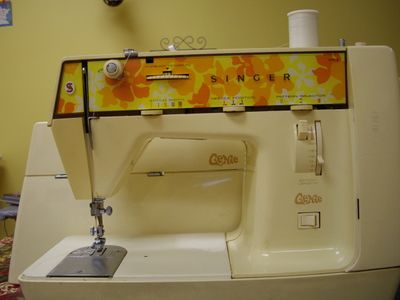 I purchased a Singer Genie for a variety of reasons. First ... it was cute ... and that's what it's all about! Second ... I could afford it if I saved enough from my job working in the kitchen at Ramsey Hospital. Third ... it was a Singer and I'm all about brand loyalty. And fourth ... it was portable because what no one knew is that I was talking to the Army recruiter and I knew I wasn't going to need a machine in a cabinet. I was going to see the world ... donchya know! 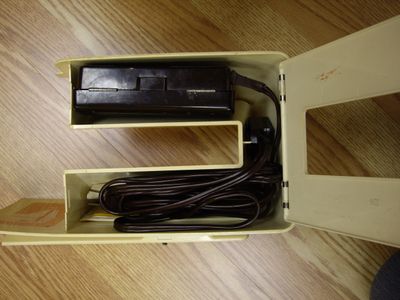 I loved that everything fit conveniently in the carrying case. And boy ... did I lug that machine around! It lived in several different states and any number of military barracks, on-base housing and off-base as well. I had lots of 'friends' because everyone seemed to need new rank stitched to their uniforms as we were promoted ... sometimes for $$$ ... sometimes for the price of a night out. 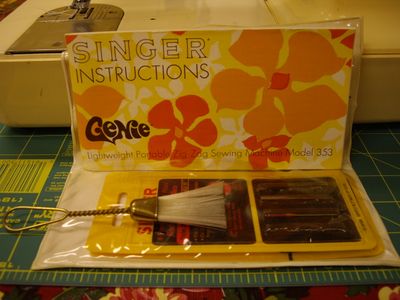 It really was pretty simple to use ... and the instructions had that delightful Mod Squad look just like the machine. When I moved back home to another apartment in St Paul,  it helped me make curtains and pillows. I sewed a tree skirt for our first home together on it ... that great big wedge pattern with the wide eyelet trim all around the edge. The next year I made quilted stockings for the three of us because by then we were celebrating Rob's first Christmas. The following year I made one for Alex on the same machine. And then, a few years later when my nephews Larry and John were hospitalized for months following a snow mobile accident, I taught myself to make dolls on it so I could take them to the hospital to work on. 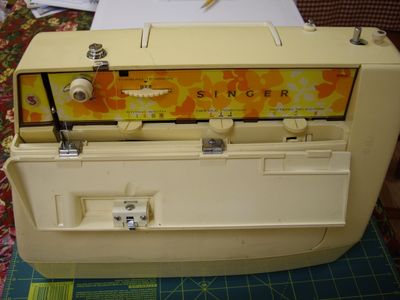 I had a repair man tell me once not to get rid of this machine because it's the last model Singer made that was all metal inside. The weight proves that! I cleaned my old friend up and packed everything up ... but not because I'm going to put it back on the shelf. I love this machine and it fits the look of the hideout perfectly! I'm off to find a good repair man who can tweak it and clean it. Anyone have a suggestion? 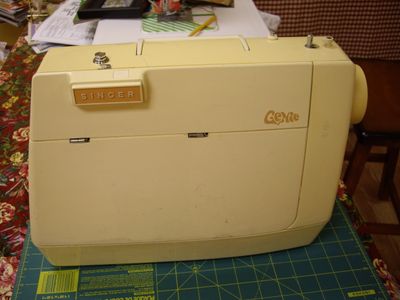 I was looking at your past dated posting and saw this...love it !!!

I have a fantastic repair guy, but... he's in Dallas.

I got my Genie in 1974, I graduated HS in June and bought the machine with my money from my first real job that summer. My sister still has the machine, and it still works!

Art's Sewing Machine Repair on Payne Avenue is a wonderful place for Singer repair. One of the only ones I know that works on Featherweights. Give him a try.

Oh, yes...meant to add that I have two other machines since then but the Singer will stay with me unless it totally dies. It is a great, reliable back-up machine when these new-fangled ones have some computer problem...which they seem prone to having!!!

I have a Singer that is a true workhorse.....must be about 30 years old now.....and I won't get rid of that one, either. They don't make them as good any longer.....NO company makes them as good as those old machines were!

I have mine at Valley West in Bloomington. He is the only one who thought he could fix it and I couldn't let it go.

Your little Genie definately looks like it will be right at home in the hideout! Good luck with the move this weekend - can't wait to see what you do with the new shop space!