A few pretty things to shake off the Winter slump. 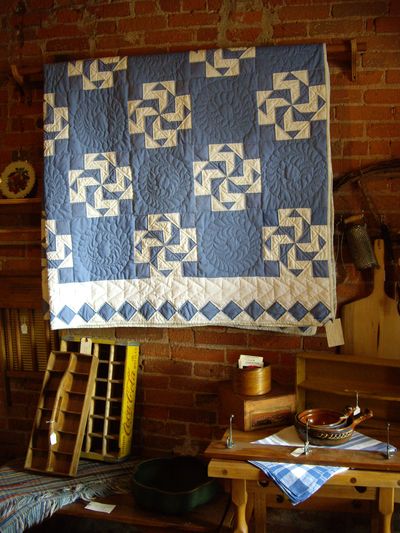 I needed something ... anything ... to help me get away from the end of Winter funk I have going so I headed to Stillwater to look around and be inspired. First thing inside the door I found a CrazyAnn quilt ... they called it double pinwheel or something but I knew it was a Crazy Ann because I have one of my own in blue and white. 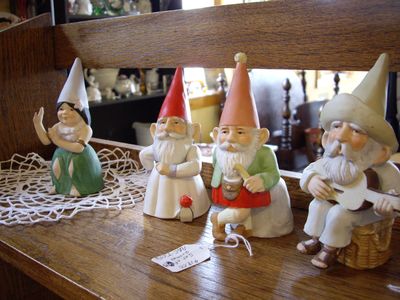 Isn't this a scream? What kind of tune is the guy on the left strumming that's making the girl do a hula dance? And it looks like the guy by the strummer is getting ready to break into it as well. 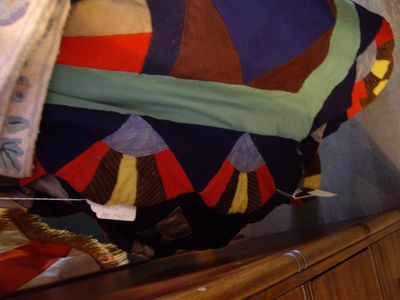 A cute wool quilt. At first I thought it was a crazy quilt ... because I'm into those right now with Wool Crazy at the top of my brain ... but then I saw it wasn't ... but still interesting. 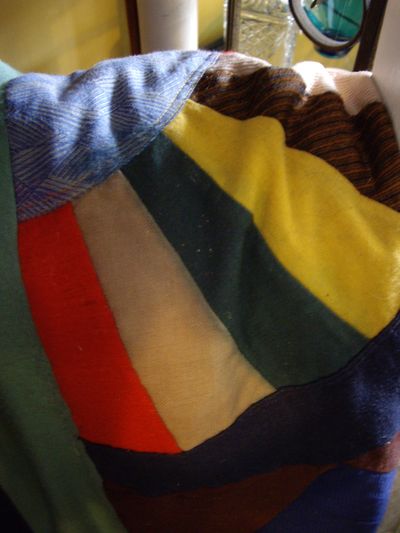 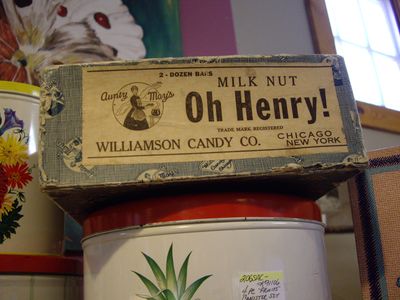 Saw this and immediately thought of my friend Heidi's little boy. 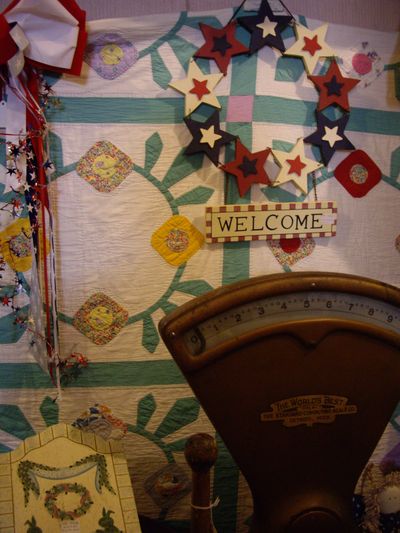 This display was sort of a mish mash of themes but that quilt in the background with the square flowers was quite pretty ... I wanted to remember it. 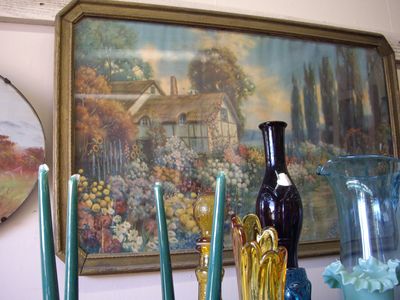 Found a darling print of a cottage. I'm sure this is what everyone thinks Rosebud's looks like and I sort of wish it did. All those pretty flowers ... so peaceful and relaxing. I bet someone is sitting out on a bench doing something creative and inspiring. 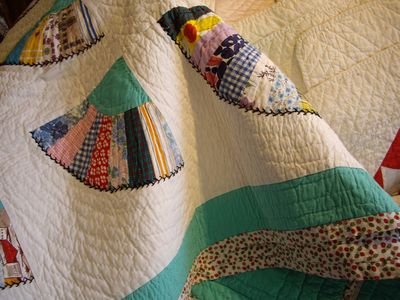 Turquoise is the 2010 color of the year. Must have been picked previously in the thirty's or so, too! Doesn't that look like Summer? 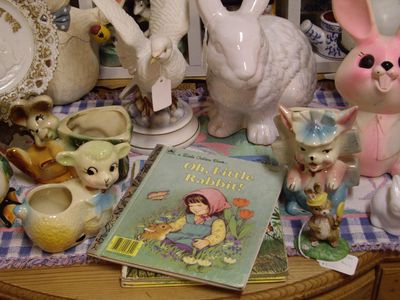 Dreaming of the days when bunnies are hopping through the yard again and the feed mill begins to advertise baby chicks. And when we can pull out the water cans and hoses.

Desperate to make something ... anything ... that remotely makes me think Spring might actually come, I hauled out the wool and made this for my coffee cup plug. Then I made a couple other flower projects ... we're inviting everyone to the Cottage on March 6 for a Spring project day to celebrate the beginning of National Craft Month. Circle your calendar! 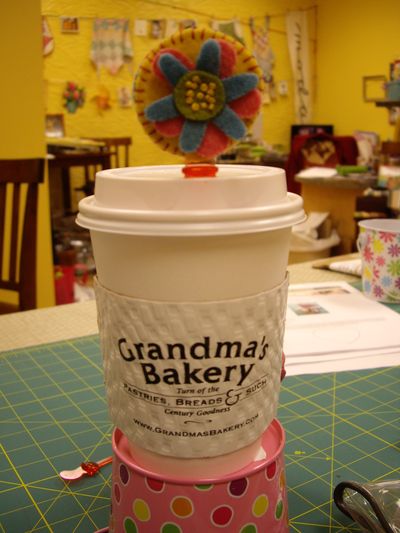 I heard it on the radio! 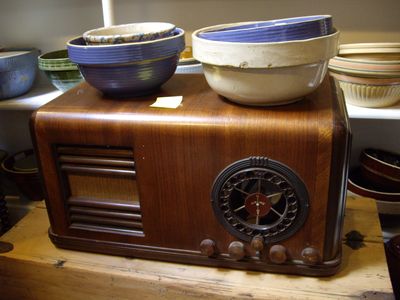 Remember how anything worth knowing was heard on the radio? The morning news as everyone got going for the day ... the Minnesota Twins games ... the hottest, new, rockin' song ... or the school closings on snow days ... we heard it all on the radio! So wouldn't you agree that the radio is the best place to find out what's going on? 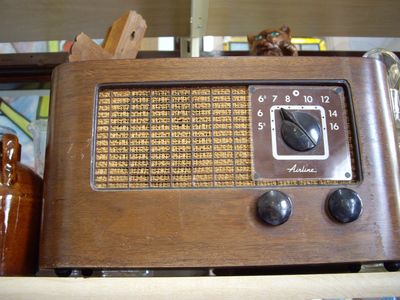 Just like everything in life, things change ... the radio might not be the box with dials that you remember ... now days it can come in many forms ... like online through your computer! You've gotta admit ... we spend a lot of time online so isn't it natural to assume it's the best place to listen to a radio show? You can login ... turn up the volume and go about your business listening to whatever you choose. 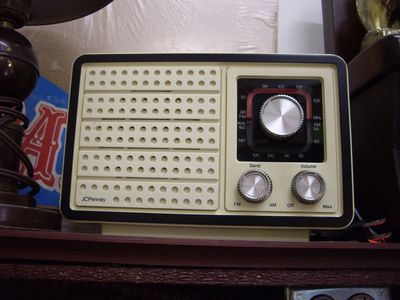 A little over a month ago, my friend Pat Sloan started an online radio show ... Creative Talk Radio. It's on the HerInspired network ... all the radio shows on the network are hosted by women like Pat. They have a variety of themes but Pat is focusing on anything creative. She's been interviewing lots of exciting people in the quilting industry ...  more from other hobbies scheduled in the future. 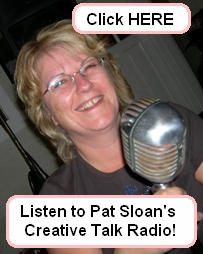 Pat's Creative Talk Radio is live each Monday at 4pm Eastern time ... here in Minnesota I rush to the hideout a few minutes before three o'clock so I won't miss a second! But if I do it's ok because a few hours later, I'm able to listen to the broadcast again.

All you have to do listen to Pat each Monday is click RIGHT HERE and that will take you straight over to the radio site ... right under the banner is a blue button with a white arrow in it ...  click that and the show will start to load. If you're a little bit early, don't worry ... you'll hear music until the show comes on.  But right on the dot, the fun will begin with Pat's interview! 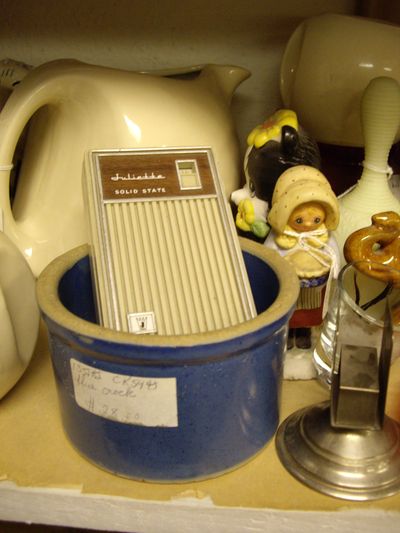 So lets say you're at work ... or in church or something ... and you can't listen at 4pm (3pm CST). It's so simple ... over on the right sidebar are the recent shows ... you can listen to any that you've missed or listen to them again if you enjoyed them a lot.

The current show usually loads up there a few hours after the live one ends. So if you're working a little late, you can download the show from iTunes ...  then if you're stuck on 494 out on the Bloomington strip or are having to sit at 694 & 35E waiting for traffic to speed up, you'll be able to plug in your iPod and your trip home will be so much more fun! 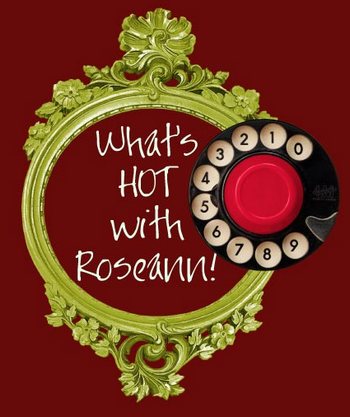 I'm so excited to tell you I'm going to be a guest on Pat Sloan's Creative Talk Radio on February 22! Actually ... Pat has asked me to come on once a month to chat about things I've found in the quilting and craft industry ... pretty exciting! (A little bit nerve wracking, too.)

Pat's other guests on the 22nd will be the people who manufacture the Reliable Iron that Pat uses and loves ... as well as Jenny Doh ... the former editor-in-chief of Stampington magazine. Jenny's going to talk about what sparks her creativity and about her new venture that'll begin on March 1.

PLUS ... Reliable Corp is going to give away a free iron and Jenny has some giveaways, too! Listen to the show and read Pat's blog to get all of the details. Leave a comment on her blog telling what your favorite part of the show was and you may be a winner. You have until noon on Friday, February 26 to do that so don't forget.

I love old stuff but I really love new ways of doing things,  too. Pat's radio show on the internet is just the best ... I know you'll be circling Monday afternoons on your calendar because you're not going to want to miss a thing!! 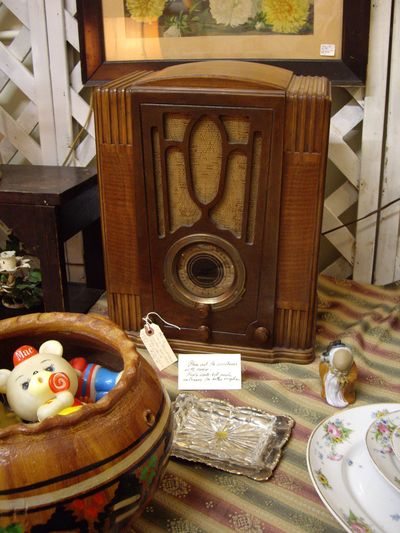 Dashing to the Fire Escape! 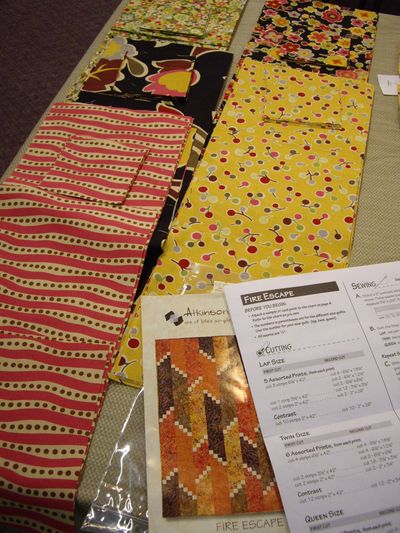 I've been wanting to make Fire Escape from Terry Atkinson since last Summer. I was so jealous that the other shop owners at Terry's retreat had made one. Finally ... with a new shipment of fabric in the door ... OZ by Moda ...  and some motivation, I made one!! I started it on Friday night about 5pm. I did have a little help ... Deb cut it out for me. I sewed for an hour and fifteen minutes on Friday, on and off throughout Saturday ... in between waiting on customers ... about three hours on Monday and a couple of hours today. And it's done ... just waiting to go to the quilter's. I'm giving a talk to a guild on Thursday night and am bringing it to show, even though it needs to be quilted.  That was my motivation ... I wanted something new for show and tell. I'm so happy at how it turned out ... I wanted to give you some tips that I picked up so that you can make your own. Think about it ... you could get it done in a weekend! 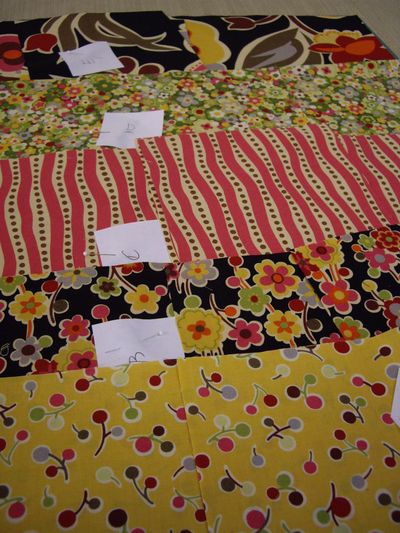 Tip #1 ... label everything! Terry said so. It helped me keep things straight as I worked my way through the pattern. She also said to put the darkest color in the second position and it worked great. I put the other dark one in the last place and that turned out to be a good spot for it as well. The construction method was slick ... sewing strips together, repostitioning them, subcutting and sewing into four patch blocks ... it went so fast. The lime green is my fire escape ... I'm going to use it for the binding as well even though there was plenty left to make a scrappy binding. 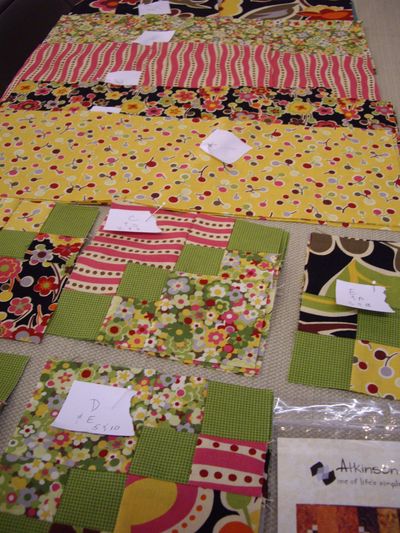 Tip #2 ... label some more. I wrote the position and rows each position was in on my slips of paper. And I used Terry's layout guide to help me ... I needed both in order to put the quilt together correctly.

A nice open floor or design board is a must for this. See how my fire escapes are going in different directions on each row? It's important to keep checking so you don't have them running the same way. How would the people get out of the burning building otherwise? 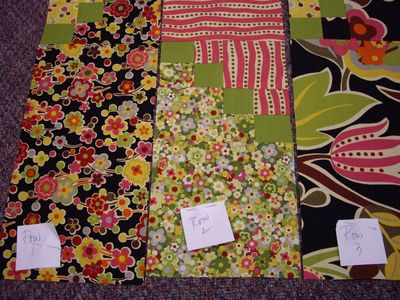 Look at that! I'm moving right along!! I put arrows on my row markers to indicate which side of the row I need to stitch to the next. I had to wind three bobbins and only used my seam ripper twice. Personal best on that one. 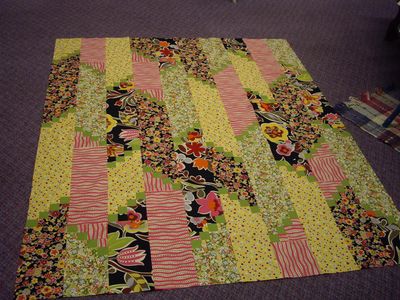 Ta-da! There it is ... lap size quilt finished. All my fire escapes are marching in the right direction. And yes the stripes are going in different directions because that's the way they want to go. I cut fabric for a customer who wanted the same combination but she chose red for the fire escapes and binding ... I want to see how hers looks compared to mine. So ... if I can make a quilt top in four days working part time at it, couldn't you make one in a weekend ... like at the retreat maybe? This is a great quilt with terrific directions. I think everyone needs one. 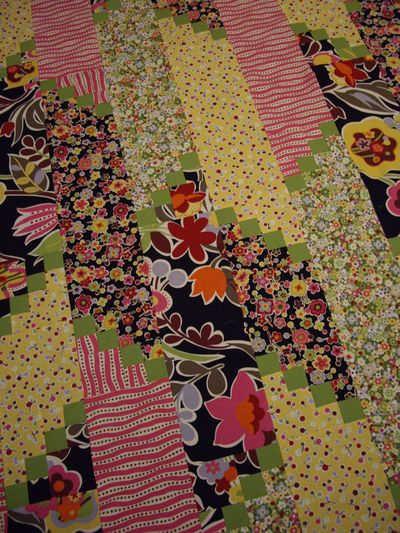