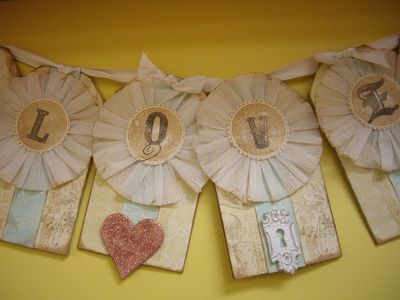 Monday on Pat Sloan's Creative Talk Radio ... the link is over to the right on my sidebar ... Pat and I were talking about how much I love banners and garlands. And it's true. I do! I think they're fun ... that they offer a fast, creative challenge ... that they fill up an empty space with happiness! They're easy to make and you can use paper or fabric or a combination of both when you're putting them together.

One place that I found inspiration was on Get It Scrapped where I took the Garlands and Banners class a few years ago.  I refer to the lessons when I feel the itch to make one ... a jumping off point. 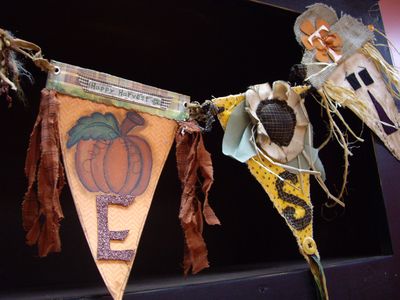 I've had a blast taking part in the banner swaps over at Primitive & Rustic Crafts. Everyone chooses a letter based on a theme ... in this case it was HARVEST ... and makes one for every member of the swap. And then you mail them off and sit by the mailbox for yours to come so you can tie them all together. I've tried to get a group together at the Cottage but never get enough to play. What's up with that? Looks like I'll have to continue to get my fun online. (Big huge sigh.) 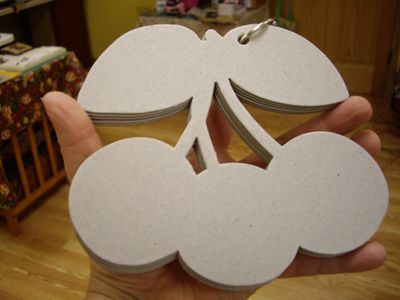 Sometimes I find things that inspire a banner ... like this chipboard album. I'm going to take it apart and do something with it ... then string it back together. Wish I could work on it today! 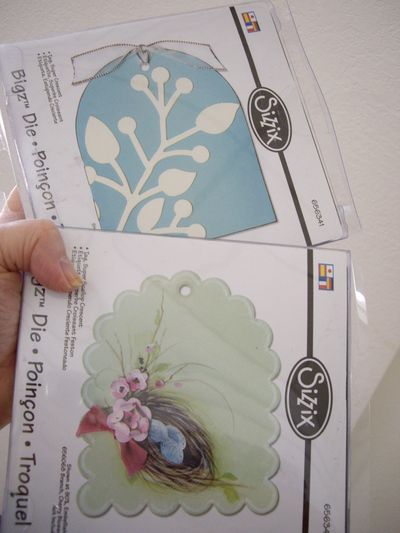 I'd love to make a banner with these Sizzix die cuts ... they've been calling to me since the day I got them. In fact, I've cut a few out of cardstock and have them laying around for inspiration. I want to make one that says HOORAY! because that's the way I feel every time I make something new! Or finish a project I've been laboring over. 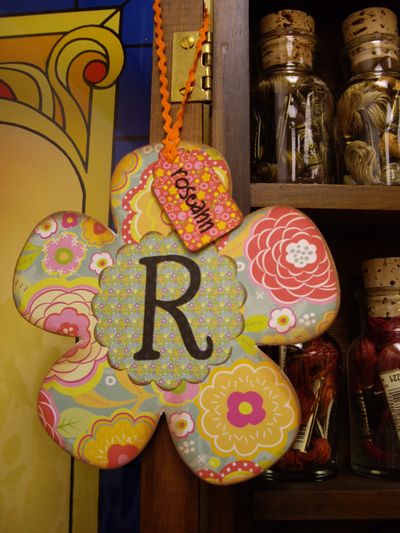 And the tags I made for the retreat ... screaming 'garland'! 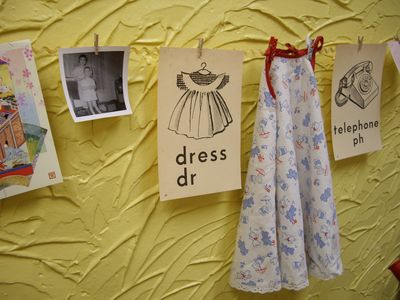 Sometimes the banners are very impromptu. I've got rick rack strung on a wall and I clip things to it ... like the dress from my baby doll and flash cards and a pic of my little brother when I forced him to wear a dress one time! I've got all kinds of stuff pinned to that wall ... children's aprons and cards and other little doodads that I find interesting. Happy stuff.

But the one garland that everyone talks about is the one that is strung around one of my doors. I tried to explain it on Pat's show but sometimes words aren't enough. I don't remember where I heard of this but basically, I took charm pack squares ... 5" squares ... and folded them like you would a Prairie Point. Then I cut fabric strips and made binding. The raw edges of the Prairie Points were overlapped and inserted into the fold of the binding and then sewn through all the layers. Left long tails at either end as a way to tie them up if I wanted but I just let them drape over the door frame. Great way to dress up a design wall or get ready for a party.

So am I the only one who loves these? I don't think so. Make a banner or garland when you're at loose ends and need to satisfy that urge to create. Fun times!! 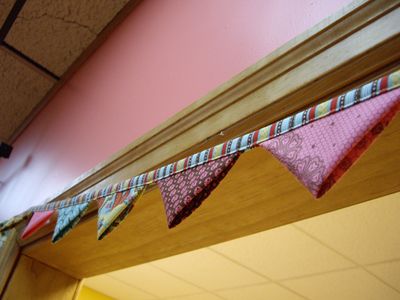 I love banners, too.

I like to hang them from my red and white Hoosier cabinet. I love to "dress her up" for the seasons. When I add a banner to her it looks like she has on pearls.

Been out of town, and trying to get caught up - these are soooo cute. Pat sent me over, Great idea, thanks bunches!!

I did the Charm Pack garland at Christmas and put it on one of the trees at the shop...it was too cute and so much fun to make.

I really like banners and garlands too. Haven't seen very many in real life, but last Christmas, I was quite smitten and put them on my to-do list. Haven't made any yet though.

I find your banners to be very interesting. Some good ideas.

Too fun! I think a banner spelling out T-E-A is exactly what I need over my teapots and tea cups displayed in my kitchen! I've tried other things, but nothing was "it". Thanks for the inspiration!

I love your banners. Too cute.

I love banners!!! And please post what you create with the Cherry Chipboards. I have some also and think they're adorable (but haven't done anything with mine yet either). Sigh.