Come on! We're not talking about dental floss here ... we're talking embroidery floss! And did you ever see such a mess? Hundreds of skeins jammed into a project bag ... and me only using the dozen or so that were on the top. Well ... things changed this afternoon because I've got a new organizing system for my floss! 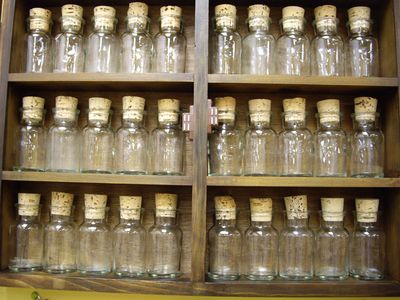 Spice racks ... that's my new secret weapon! I've had this idea for sorting and showing off my floss for about a year but haven't found anything suitable ... and affordable. Until last week. I stopped at the Loft Antiques at 50th and Xerxes and as soon as I walked in  spotted a basket of bottles on the floor. Turned out if I wanted them I needed to buy the spice cabinet too. Seeing it was cute with it's stained glass windows ... and the dealer dropped the price another twenty bux ... I decided that my hunt was over and I'd be able to get my floss in order. It held thirty bottles! Surely enough. 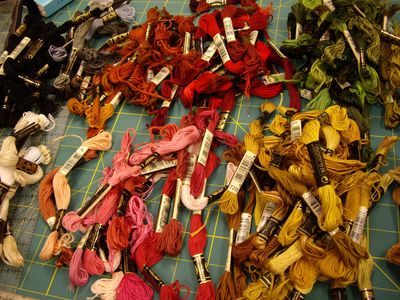 When a project is this daunting, you have to just dive in and come up with a plan. First, I separated everything into color groups. 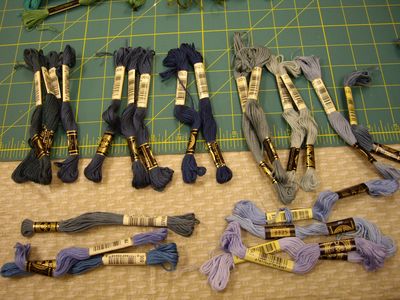 Then I pulled them into smaller groups by light medium and dark so they'd have something in common. I could only fit six or seven skeins in my bottles. Multiples were stored someplace else. Don't ask. 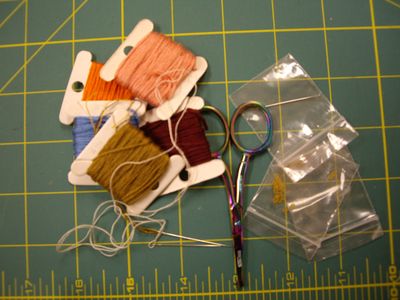 Found some interesting things in that bag ... other colors painstakingly wrapped on those plastic cards years ago ... needles with thread ... yet another pair of airplay safe scissors ... and a couple little bags of beads. What were they doing in there? 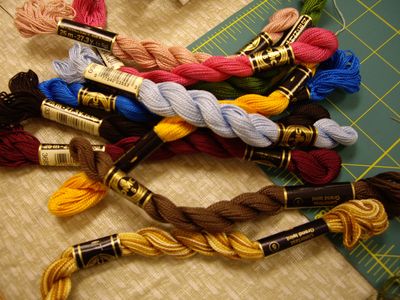 Some pretty perle cotton ... clueless where they came from because I don't typically stitch with it. 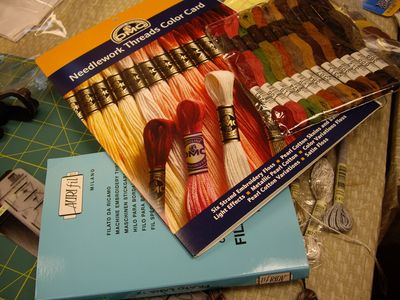 Color cards ... and a sample pack of Cosmos floss ... wonder where that came from? 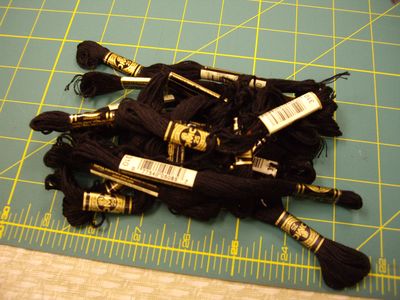 And really ... do I need this many skeins of black floss? It's not like it's Halloween or anything! 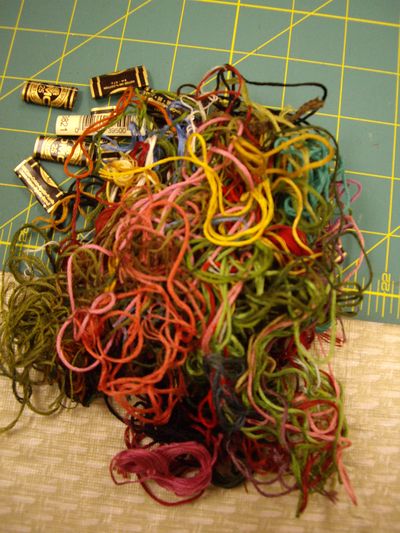 And then there's the bundle of odds and ends ... pieces that were cut and couldn't bear to be thrown away ... just in case there's a floss shortage. I'm going to take them out to the back yard and string them in the trees. It's almost nesting season and those birdies love having a colorful home to raise their babies. Don't worry ... I'll cut up the really big pieces. I want to keep some of the colors I use a lot close by ... I like to roll them on to old clothespins ... found a Longeberger basket that was sitting empty so now they'll have a home ... plus they'll be easy to move with me when I want to take along a stitching project ... like next week when we have the retreat!

So finally ... I'm done. Don't they look adorable? We hung the cabinet on an empty wall in the hideout ... found some things to stash on top or hang off the doors ... my wool swatches look great hanging underneath on an old rack I found one day.  I'm so excited to have the messy project bag empty and now really want to stitch something! What a great feeling. 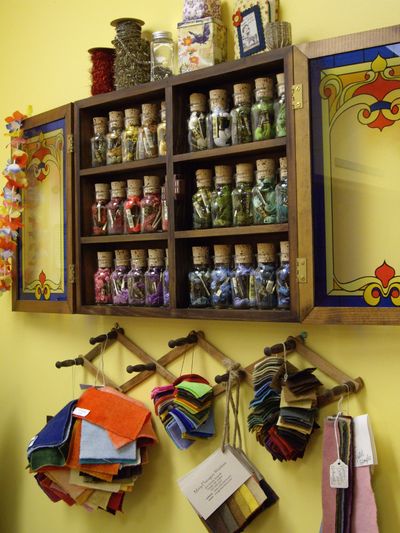 Hmmmmmm.. In the end it is now well organized in the spice rack. Great job of cleaning it up!

I absolutely love this idea of a way to store your floss! How unique and pretty, too!

what an awesome way to display your floss!! The cabinet is really lovely. Congrats on such a great find!

Love your idea - what a find!!......it is so neat!
The Wisconsin girls definitely need to visit you at the hide-out soon.

Waow: this is great !

Looks adorable, and love the wool swatches below....hmmm now if only I had more wall space.

What a really cool idea. Your display looks great!

Oh What a fabulous way to store your threads. I love it. Your story was really quite entertaining. Thank you for cheering me up on a dreary rainy Arizona morning.

That is really cool. I bet it's so nice to see when you walk into the area.
Thanks for sharing your great ideas.
Mary

I lover the bottles...I was walking around to see where I could hang one of my own...lol
I love the clothes pins...where do you find them without a spring?? Dianntha

i need a hide out!!! well what i have is ok.. just needs to be bigger space so I can hang stuff on the walls!!!

you should submit this to the magazines ... it is SUCH a cool idea!!! And i like the smaller bottles I use my old canning jars!

Oh my goodness - how gorgeous is this! It is useful and a piece of art!

Oh my goodness! I thought I had alot of floss. I love what you did! The spice cabinet is awesome and I also love the clothespin idea. I am going to have to find some old clothespins. I wonder who I can talk into wrapping the floss onto them?? Thanks for the inspiration. You are blessed to be so creative.

You never cease to amaze me with all of your neat ideas! What a treasure to find & organizing most of your floss....a plus! BTW, what did happen to all of the multiples of floss???? ;-) lol

OMG! Now that's what I call a find!!!! Much better than anything I could have scored for you. :-)

your post made me drool! I love your solution for the floss explosion...I'd die for that cabinet!

What a great way to store and show off your floss! I love it! :0)

Great idea! The stained glass doors are beautiful and all the extras in the bag [beads, scissors and the unusal threads] were an added delight. I wish I lived close by so I could see it up close. ENJOY!

Only you would think to bottle your floss! It looks adorable, and I can't get over the stained glass doors!