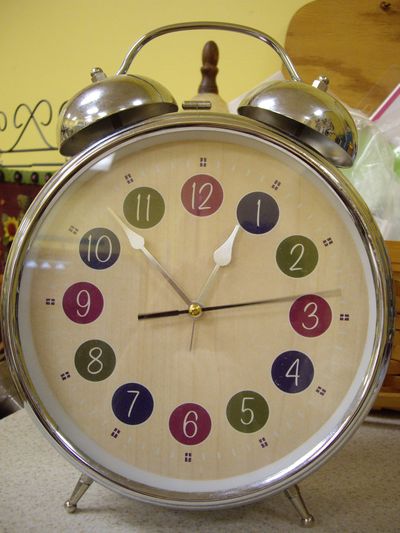 Don't you just love this alarm clock? I found it at an antique show last weekend and it's perfect for the hideout. I never seem to know when to go home so this ought to do the job to remind me! It's huge. So ... what have I been crafting. Stuff for the retreat, of course!

At the retreat, I like it to be just like Cheers where everybody knows your name. So I make name tags ... but these aren't the kind you slap on your sweater. These can hang off the handle of your sewing machine or attach to a basket. I hope everyone hangs them in their sewing room so they remember the fun they had! 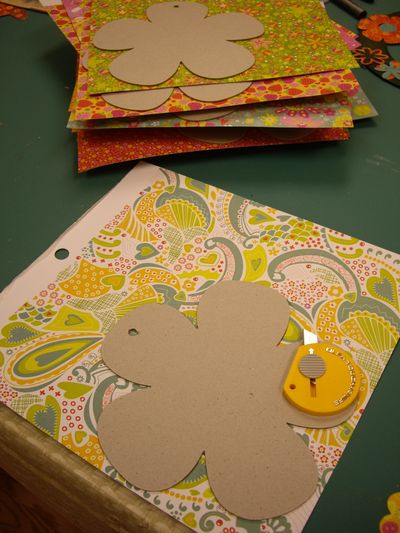 I found gigantic chipboard flowers at Michaels ... you were supposed to make an album out of them but I took off the ring and used them individually.

First, I slapped a layer of ModPodge on one side and laid it on the wrong side of my paper. This was hard because both side were equally cute so I made sure to flip the paper over on some of the flowers. I like to do all of the same step ... it helps me work more efficiently that way ... a hold over from those years of craft shows.

Used my nifty OLFA touch knife to cut around all the shapes ... big hint if you do this ever ... turn the paper and not the cutter ... it goes faster and the cuts are better. I had a rotary mat  underneath so I wouldn't ruin my table. 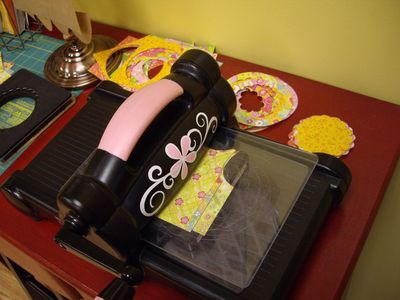 I'll use any tool if it'll speed up the process. So I turned to my Sizzix Big Shot to cut out a scalloped shape that will make the flower center. Cut tags, too. I used the scraps from the flowers for a coordinated look and so that I wouldn't have to go digging for more paper. One thing I did as I finished each flower was to quick cut the leftover paper into the sizes I needed ... either 4" for 2" ... that way when I went to die cut the shapes, I didn't have to waste time cutting the paper. I clean up as I go too because I hate to work in a mess. Any scrap that is too small to be saved goes right in the garbage can I keep next to the table. 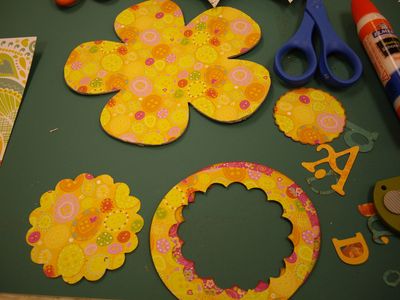 So there we go ... moving along on the project. Not sue what I'll do with the outside ring ... it was part of the die cut so since I was using scraps, I just cut them a bit bigger to take advantage of the effort. They're in a baggie eagerly awaiting another day when they'll be put to some good use. 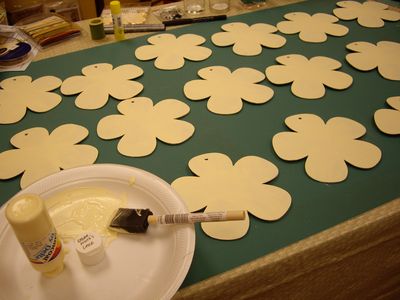 I was tempted to not paint the backs of the flowers ... but deep down I knew that was wrong. So I got out the Buttercream paint and layered it on ... two coats on each flower.  It was worth the effort ... a nice finishing touch. 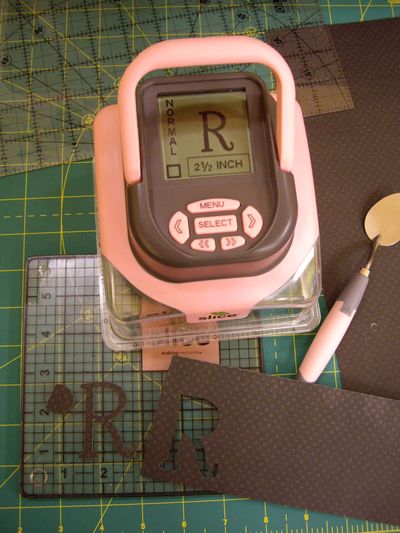 Now for the personalization ... I used my Slice to cut everyone's initial from black cardstock. We have an unusual amount of Karens, Kathys, Debs and Lindas. Only one Roseann, though!

After I inked all the paper edges with Chestnut Roan chalk ink, I glued the center and the black initials to the flower base. It was fun matching the paper so each flower looked just right! 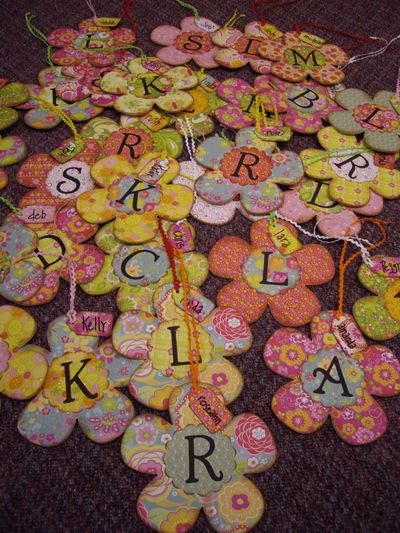 I wrote everyone's name on a tag and then attached it with skinny rick rack ... making a hanger in the process. So pretty! Each one looked unique. Just like the retreaters!! You should make some for your retreat, too. 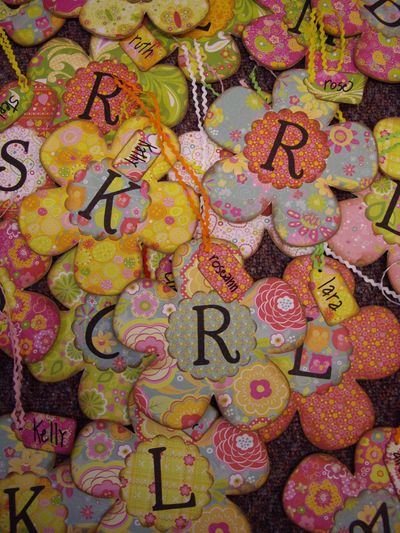 Hey Roseann LOVE LOVE the name tags! I am going to schedule my retreats two weeks after yours instead of the same weekend and use some of your ideas. (if you don't mind) Have a terrific retreat see you in July if not sooner

Love the name tags. They are so cute. I am sure everyone will have a great time. Wish I lived closer!!!

These are the cutest name tags ever! Just adorable.

OMG, I LOVE that clock. I have been looking for one and never thought to look for one in the antique store.

love the idea.. i have those same cut out flowers...

Well if those aren't the cutest name tags !! i do save all of mine and hang them of my design wall at home. The left over rings would make cute picture frames with everyones picture in the middle! Could hang with the tag. Wish i had known this before or I could have ordered refills for my hp printer that i can use without a pc. I am so looking forward to this retreat !!! Let's go !!!!!!!