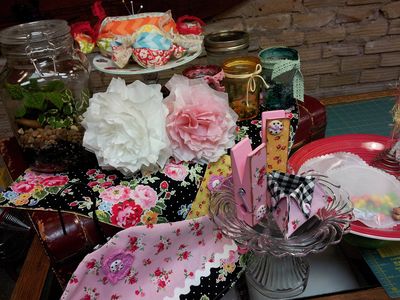 What a  better way to start off the new year than a Pinterest Party on New Year's Day! I'm still thinking of the one we hosted last week!! We searched through our Pinterest boards for some of the best ideas ... especially the ones that were quick to make.  Boy was that a hard task! I've pinned way too many things but it sure is nice to be able to run there first for inspiration! 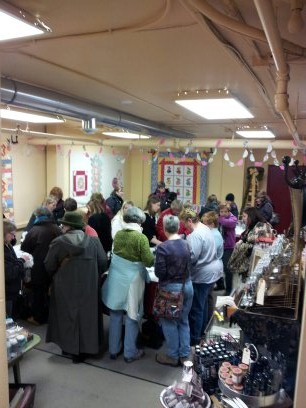 The party was from noon to five and we asked that people rsvp in order to receive a goodie bag. Imagine our shock when 84 did! I guess coming to a girlie party is much more fun than watching football and taking down the Christmas decorations, huh. 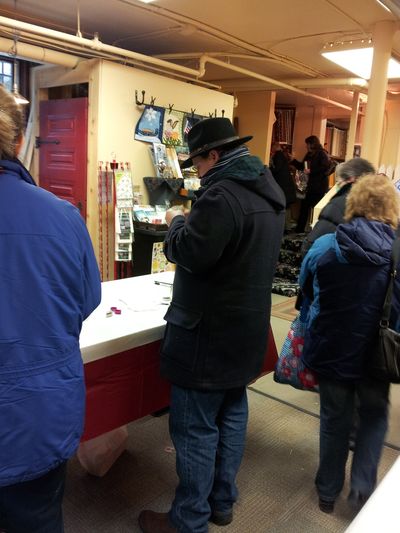 But wait ... it wasn't all girls! Poor Joe ... he was just delivering  Starbucks and then got caught up in the crafting frenzy. 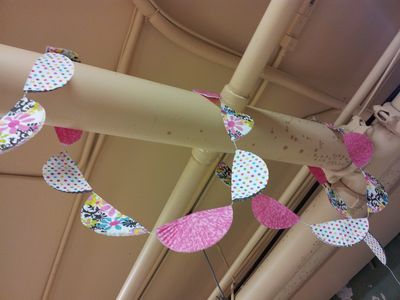 We decorated high and low with projects ... like this cupcake liner garland we hung from the pipes. It took about a hundred liners and a spool of baker's twine. A tube of UHO glue and an hour of my time and it was done and up! Yay!! 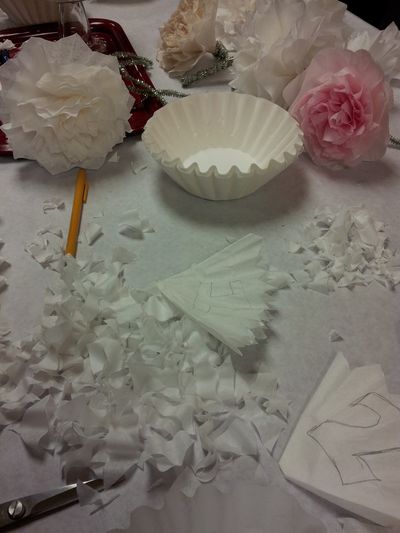 Don't you love a creative mess? The scraps are the result of beautiful coffee filter flowers ... no two alike. Someone told us that they were at Keys having lunch while they waited for the crowd to thin and looking around the room, they could tell who had been at the Cottage! 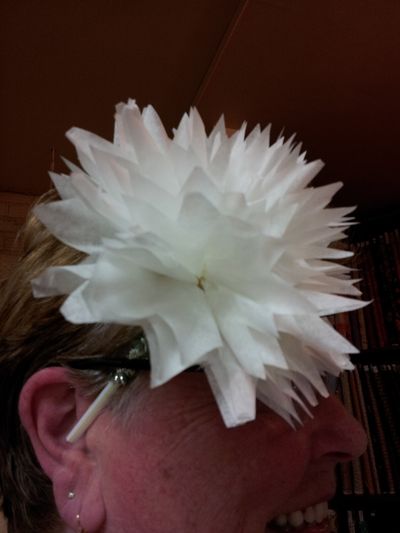 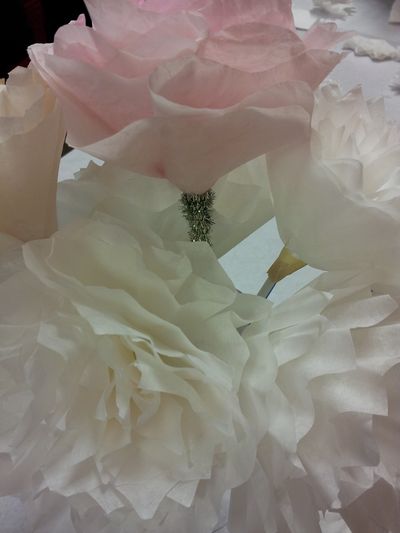 We made clothespin clips for a make and take too ... we used UHO glue and strips of paper, then sanded the edges and added Chestnut Roan chalk ink to darken them. I found some jumbo clips at one of the chains and used Mod Podge to cover them with fabric, too. These are so great to use instead of paper clips! 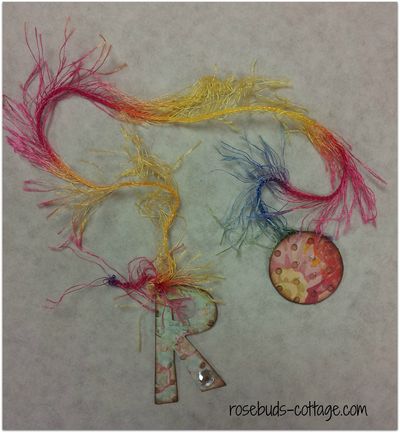 Everyone had the chance to try out our Sizzix Big Shot die cutting machine when they made a book mark. We glued two pieces of paper together with the pretty side out ... then ran that though the machine with the paper covering the letter they wanted. We had 1" circles precut so everyone choose two. The letter and the circles were put into an embossing folder and run through the machine again to give it some texture. A little bit of chalk ink on the edges ... the one end of a 12" piece of yarn was glued between two of the circles ... the other was tied to a hole we punched in the letter. Some bling and we were done! One woman said she'd going to make them for her book club group. Love inspiring people! 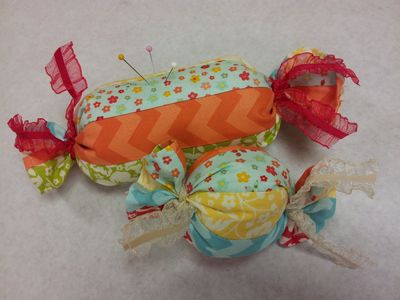 The pincushions were from a Riley Blake tutorial ... I used some of their 2 1/2" strips to make them and tied the ends with their pretty elastic lace. We didn't make them at the party ... this was part of our inspiring display. 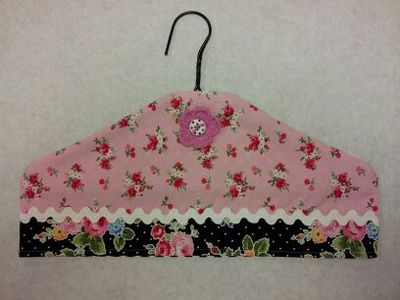 Same with the clothes hanger I made using the new Pam Kitty Morning Love fabric. 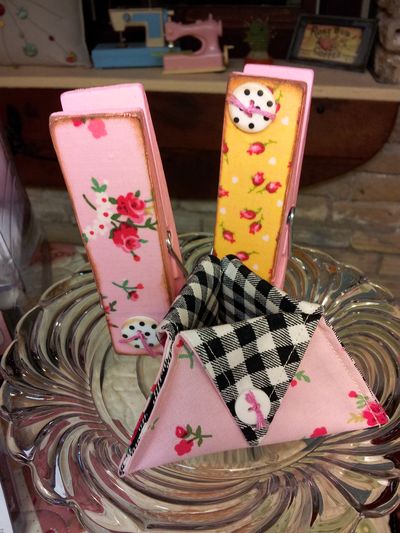 Got a little bit carried away with that fabric ... the scraps covered the jumbo clothes pins and more scraps made the triangle stasher.  Those pedestal displays were Goodwill finds too ... just a few bux each but so cute! 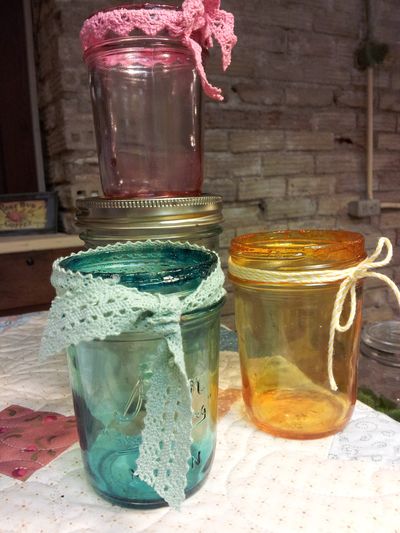 Loved making the colored jars and the waxed paper favors  and some terrariums too ... those were fun to make. 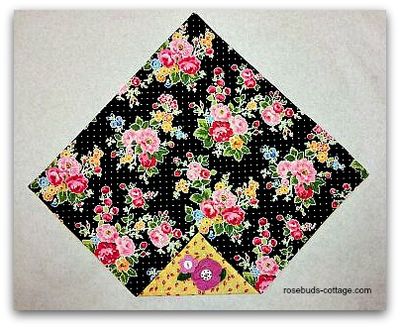 Everything was set on our quick and easy table topper ... it truly took minutes to make ... and of course, since Pam Kitty was in the room, we used that! Cut two pieces of fabric 18" square ... we used two fat quarters ... put them both right sides together so that when you cut them you're ready to sew. Stitch all around the edges with a 1/4" seam and leave a small opening on one side ... about 2". Turn it right side out through the opening and press. Use a pin or large needle to pull out the edges at the seam. Topstitch 1/8" from the edge ... that way you don't have to hand stitch the opening closed. Turn one corner back so it forms a 45 degree turn and shows the pretty fabric from the back. Anchor it with crochet flowers and buttons. Ta da ... ready to use!

If you were at our Pinterest party, I'd love to hear your thoughts. I know it inspired many to run home and make something ... and that is exactly what I was hoping for! I want to inspire you to create and I hope you'll make that your theme for 2013! 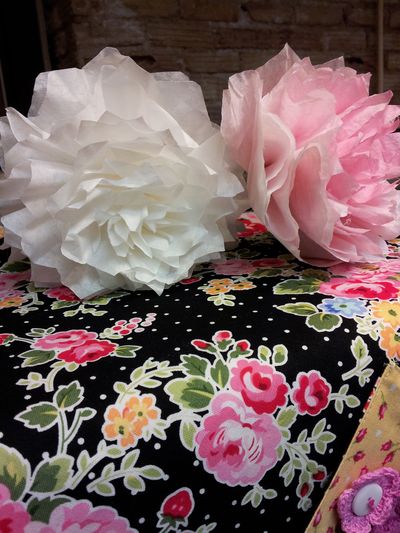 How about an online Pinterest Party. Give everyone a supply list, or send out kits, and do one every week, or more often. I'm in!! Looks like you had a ball.

What wonderful projects...am sure everyone had a fabulous time!

I wish I could have been there!