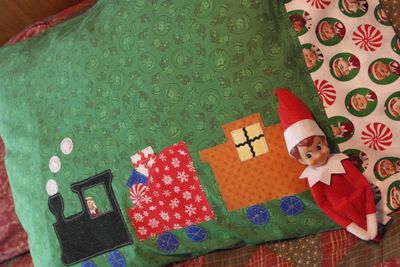 Last month, American Patchwork and Quilting asked if I'd like to take part in another Pillowcase Challenge ... they recently crossed a half a million pillowcases that have been donated all across the country. Now they're working on the second half million to get to their 1 Million goal. So their plan was to have readers of their Pinterest page vote on their favorite pillowcase by repinning it. Then, they'd have some of us remake the pillowcase in their favorite fabrics. The train was the winner! Tomorrow on their blog and Facebook page they'll have links up to all of the pillowcase so you can see the options. 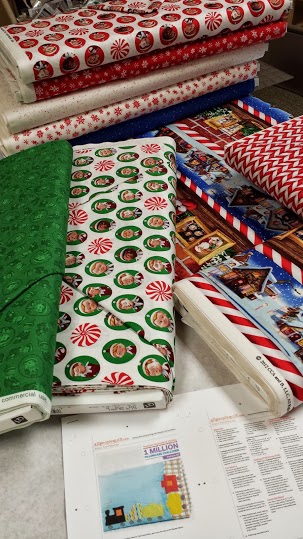 I was delighted to see the train as the choice because I had the perfect fabric ... The Elf on the Shelf fabric by Quiltilng Treasures! So many to choose from but I finally settled on the green elf face paired with the colored face fabric with the white background. It was hard because the red snowflakes and the other face fabric were calling my name, too! I wanted the train to show up, though, so the greeen won.

Because the border was busy, I chose to only make three of the cars and place them across the body. Then I went to my color wall and pulled some other pieces from Quilting Treasures to make the train cars.

One tip ... the face fabric is directional so I had to make a choice ... do the faces go toward the pillowcase body or away. I chose away so when I folded my cuff in half after I sewed the seam, I made sure the way I wanted it to go was the side that was on the outside of the cuff.

Oh ... and another tip ... the pattern pieces aren't reversed for the appliques so make sure you do that if you choose to use fusible webbing like I did.

I carefully cut out a little elf from the selvage and hid him in the window. And I made packages from scraps and added itty bitty rickrack for embellishments. It was hard to stop adding lots of extra details! 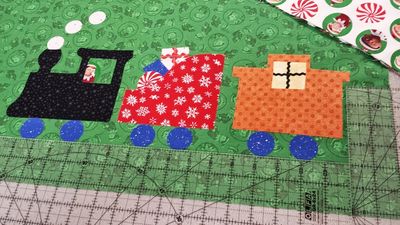 You have to sew the train pieces on the front of the pillowcase before you sew the sides. I hate guessing how it'll look so I measured 2 1/4" from the bottom and 2" from the right side for my placement. I placed the wheels along the edge of the ruler so they'd be straight. 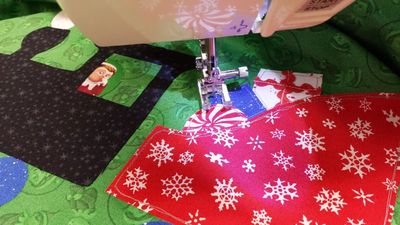 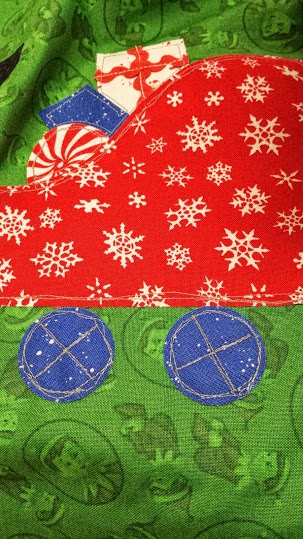 Many of you know how I love to sew paper to paper and one of the things I like about that is the imperfect straight stitching along the edges. I decided to use the same technique on my train. It's whimsical and sort of childlike and that's what I was going for. In fact, if you have a new sewer who'd like to make this project, this is a great way to get them comfortable stitching down appliques. You don't have to be perfect and that's what adds to the charm. I hardly ever use matching thread because I want it to show up. The edges will fray a bit when it's washed but that's ok, too. Low stress!! 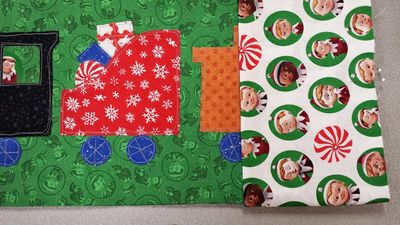 Another tip ... remember how the cuff is directional? It may seem confusing when you go to join it to the body. Because I wanted my cuff to face away from the body, this is what it looked like when I pinned it for sewing. 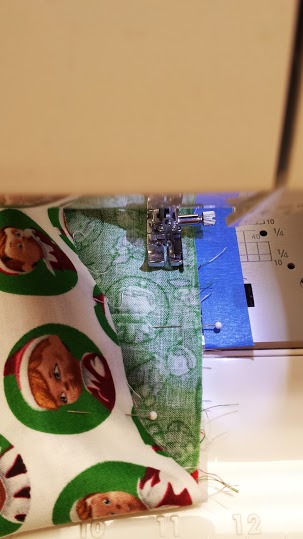 The seam allowance is 1/2" ... sometimes its hard to see on my machine so I mark it with painter's tape. It makes it more accurate and easier to control.

If you're going to make one of these pillowcases as a gift, maybe you can make a second and donate it somewhere in your community. Think of all of the little kids who will fall into pleasant dreams when they have such a cute pillowcase to lay their heads on! And don't forget to go to the Pillowcase Challenge page to add your numbers to the count. It doesn't take many to make up another 500,00, right? 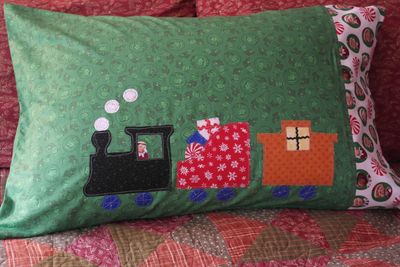 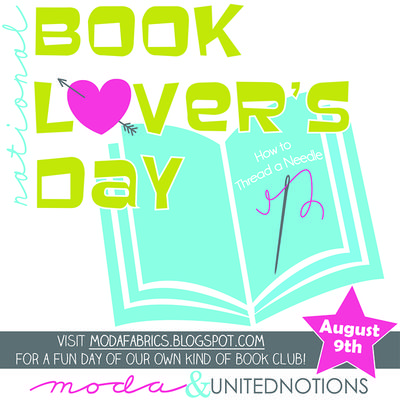 I love books ... and I especially love quilting books! When my kids were down for naps, I'd look through them and day dream about the skills I'd have someday and the projects I'd make. I was brand new at all of this back then. But I'm happy to say that because of those books, I have a better understanding of quilting now, plus if I need an answer, help is right at my fingertips! 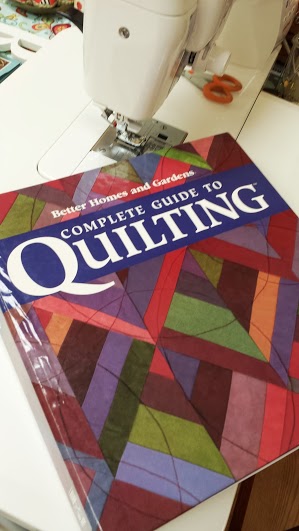 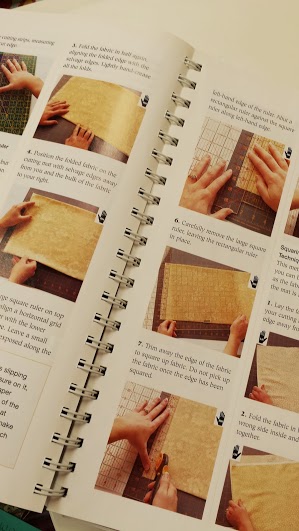 When Moda asked me which book was my go-to for quilting ... the one I used to learn to quilt ...  it wasn't hard to answer. Better Homes and Gardens Complete Guide to Quilting ... written by the editors at American Patchwork and Quilting ... has been on my bookshelf since it was printed. You can tell by how worn it is! I've used it so often to learn how to understand techniques, figure out measurements through their charts, to refresh my memory for steps I've forgotten. I love the clear photos and the spiral binding ... it lies flat on my table and I don't have to stack something on it to keep it open. Its a great book no matter which stage of quilting you're at! 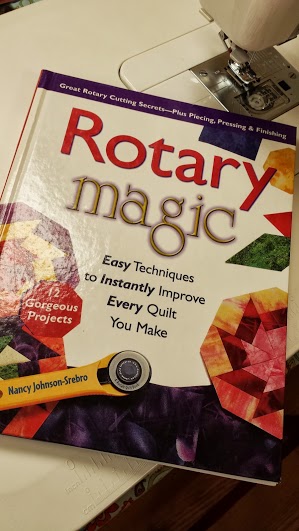 But you know ... I couldn't stop at one! Rotary magic was one of the books that I've read from cover-to-cover ... several times! It has terrific rotary cutting instructions and little tips tucked into boxes throughout the book. It has a 1998 copyright so I'm guessing it's still around somewhere. 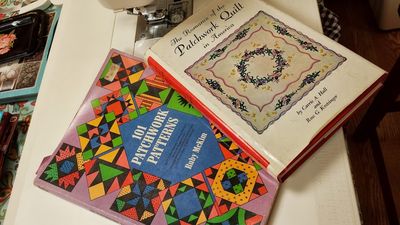 Classic books! You need to have these to complete your library ... you'll have to find them in the used book stores though ... or maybe at the quilt guild garage sale. They are priceless! I've spent so many hours with them they are like old friends. 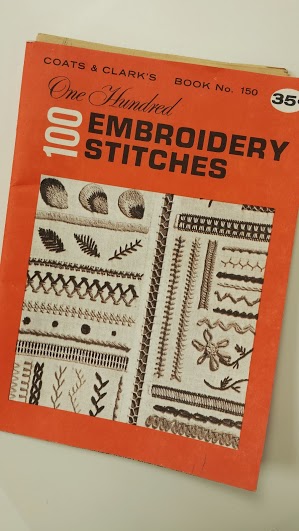 And most of you know I stitch. I grew up with this book and it has traveled around the world with me. I rescue others like it when I find them at the flea market ... I have them stashed in various sewing baskets because you never know when you'll want to try some new embroidery stitch. This particular version was the one that we had at home growing up ... don't tell my sisters that I ended up with it!

For me ... quilting books are like old friends ... I get energized by them and they answer my questions. A good day for me is when I get to spend a few minutes with them. I don't think I'm going to run out of inspiration any time soon! And I'm so glad Moda didn't ask me to show my magazine collection!!

Head over to the Moda blog to see what other designers have on their book shelves, too. There are prizes! And great books to covet. 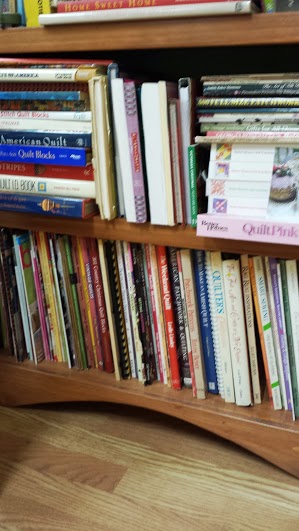