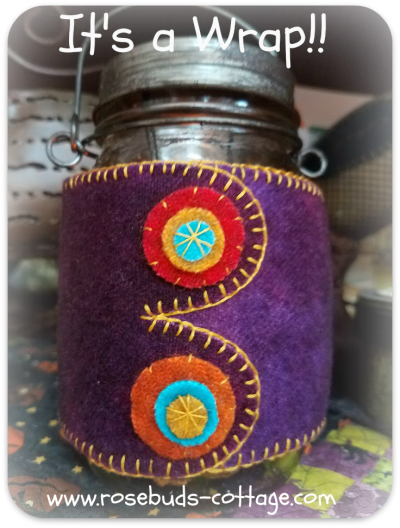 I don't know about you but when it's time to cozy up the house, I turn to candles! And while I like jar containers, sometimes they just aren't that pretty. So what did I do? I pulled out my die cuts from Sizzix and started messing around. I made a simple wrap that is easy enough to make on a rainy afternoon ... like today! 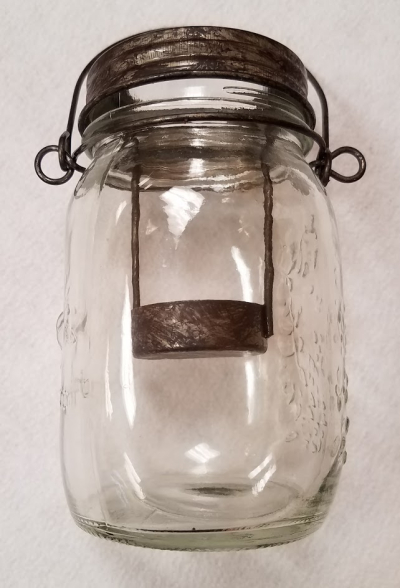 I found this jar at Michaels but I also interviewed some mason jars and a vintage square glass jar ... so jar would work. I liked this one because it has an insert that lets you lift out the candle. I grabbed one of those battery powered votive lights, too. I didn't want to have to worry about blowing out a flame.

I'm a licensed designer for Sizzix and I used these three die cuts I designed for them ... Penny Circles and Tongues, Penny Rug Mat, and Stocking. The last two fit through either the Big Shot Plus or Big Shot Pro. 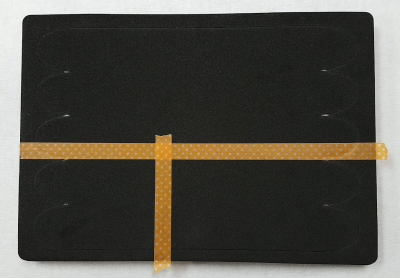 The Penny Rug Mat has five scallops and is about 9" long. For my wrap, I only want to use two scallops and have the cut piece be 6 1/2" long. I used washi tape to divide the mat for the area I needed. 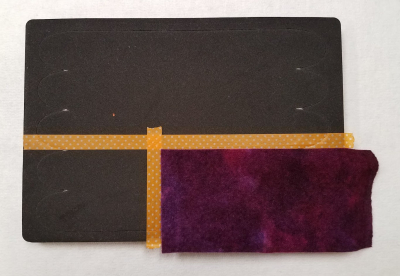 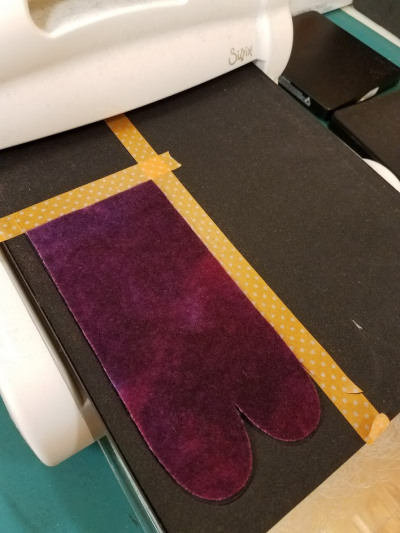 I cut a piece of wool so it was 4 x 7" and squared the right and top edges. I laid those edges along the tape. Then I made my die cut sandwich with the cutting pads on the bottom and the top, with the die cut between, and ran it through my Big Shot Plus. The scallops were perfectly curved! I cut another piece without scallops that was 6 1/2" long on the die cut too ... that way it was the same width as the scallop piece. 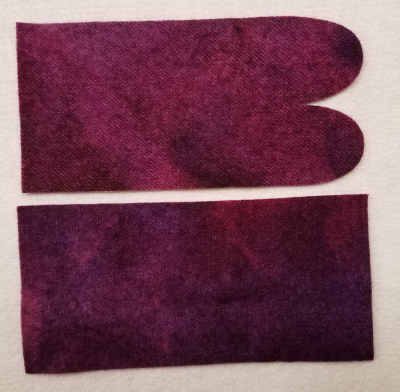 Both pieces are 6 1/2" long. The scallops will overlap the rectangular piece later. 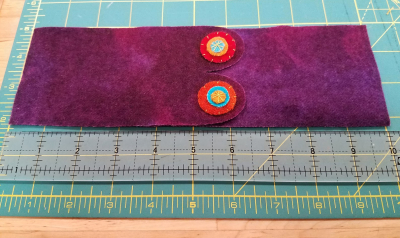 I placed the scalloped piece over the rectangular piece so that the total length was 10". I wanted a 1/2" gap in the back. If I had used a wider jar, I would have made that length longer. There's some wiggle room as long as there's wool behind the scallops. 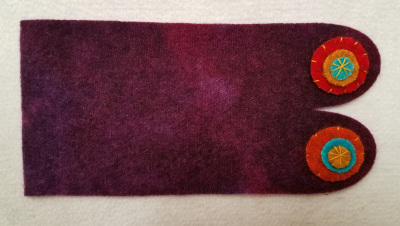 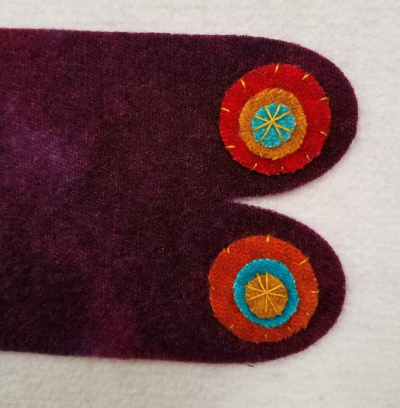 Using one strand of floss, I whipstitched the large circle. On the smallest circle, I make a star stitch. The middle circle isn't stitched. 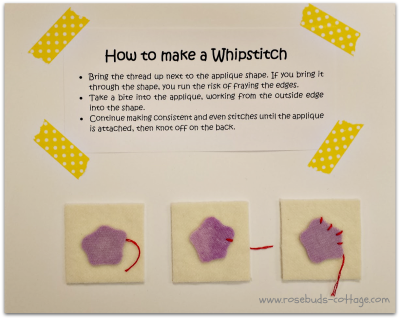 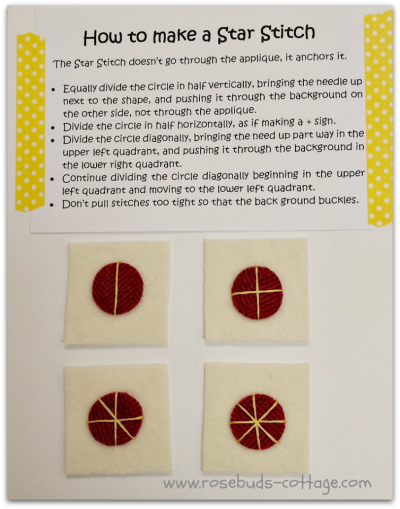 Here's a tutorial on making those two stitches. It's it the files on our Rosebud's Cottage Facebook page too in the photo files.

After the circles were on, I laid the scallop piece back on the rectangular piece. Using two strands of floss, I blanket stitched around the scallops and then continued around the rest of the piece. I like to hide my knots as much as I can so the back looks nice. 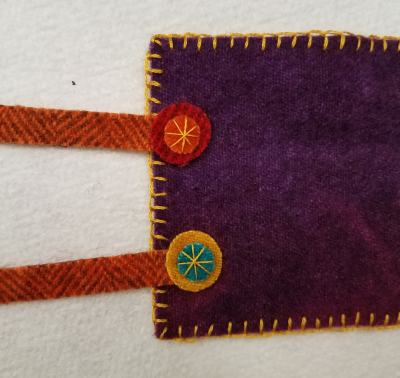 I used the hanger from the Stocking die to cut two orange ties. Then, I cut them in half. I laid them on the short edges of the wrap so they extended off the piece. I covered the cut ends with 3/4" and 3/8" circles. A star stitch, using one strand of floss, anchored all of the pieces together. Next, the wrap is tied around the jar and knotted in the back. 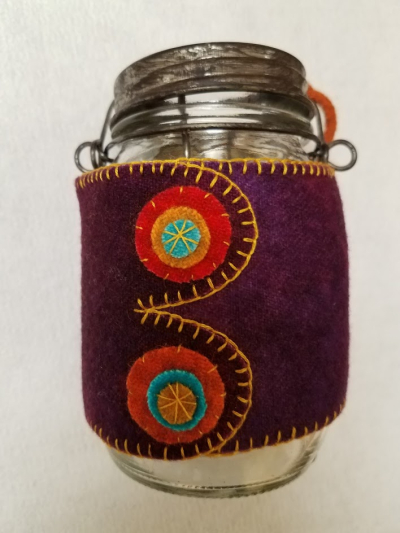 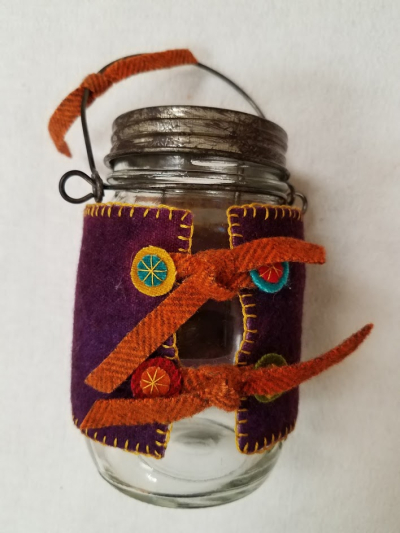 I filled the jar with some great smelling pods and berries, then added a votive light to the holder. It looked really cute with my Halloween and Autumn decor! 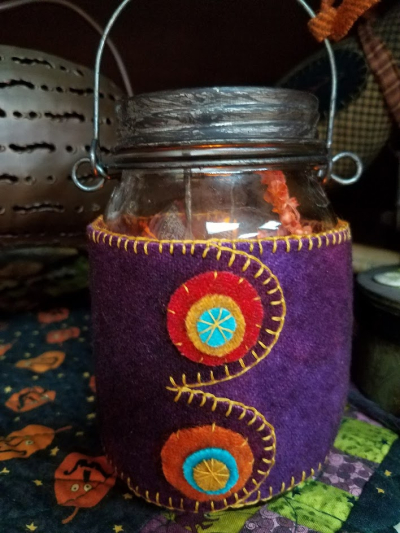 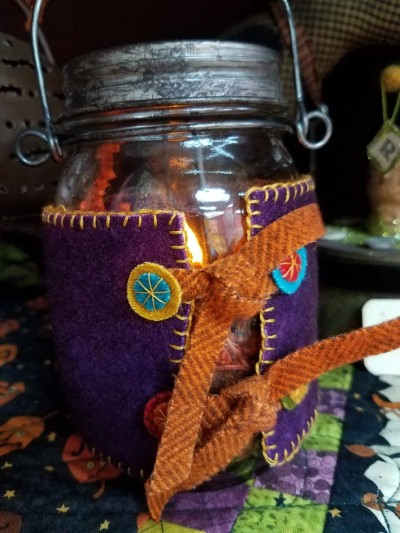 I can imagine wraps for every season ... or to give as gifts. They'd be fun filled with candy at the office. For Halloween, I'd fill mine with candy corn and peanuts!

If you can't find the Big Shot Plus or my dies at your local store, let me know ... I have contacts! And I usually have them in stock. Keep watching as more of my dies will be released at the Fall Quilt Market in Houston and even more at the Spring market in St Louis next May. I love die cutting and hope everyone will love the shapes and projects I'm designing! 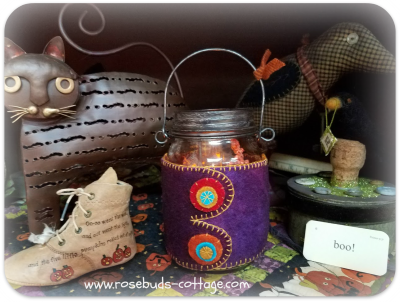